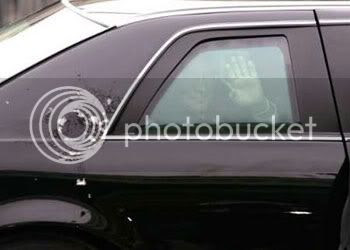 (In case you're wondering who threw that snowball at Dick Cheney's sweet ride, it was me, all the way from Wisconsin. I'm a snowball crack-shot when I'm furious.)

Get angry! Get frustrated! Then get over to Boycott Unity, and ironically laugh your troubles away. Stick figures tend to put biased political slap-fights into perspective, don't they?

Here in Madison, Wisconsin, we're in the process of accumulating anywhere from 4-12 inches of snow over the next few days. It's times like this that I wish I worked out of my home, or was held up at home with a work-related injury, God willing. Anything to keep me in front of the fireplace, instead of scraping the ice off my Escort so I can risk my life in downtown Mad City.

It's times like this that I wish I had my old car.

This was the biggest and best picture I could find. Apparently, 1987 Buick Somerset vehicles are a little rare in the auto world. Not only that, but my car could travel through time, as well. That being said, I can't believe I sold it for $150. I could've made billions!

I guess I don't want my car back, but I do wish I had that time in my life back. Not so much personally, but globally. Those few years before 9/11 were pretty decent, and the nation was more or less content with what was going on. Perhaps that was just my jaded-teenager view at the time, but I sure knew I was happier then when I watched the news, you know?

Speaking of the TV show "Cops", they were supposed to film in Madison this spring, but the city said no at the last possible second. The reason they gave was the same as Celia's. Madison is one of the safest cities in the nation, and they probably wouldn't find anything interesting enough to air. Not only that, but if they DID find enough garbage to air, it would tarnish Madison's reputation a bit. Well, there's always Janesville and Milwaukee. I'm still mad, though.

If you don't have "Soundtrack to a Midwestern Winter" by Big Big Furnace, I suggest you pick it up. Particularly if you're currently in the middle of a Midwestern Winter. They were a band from Milwaukee that broke up a couple years ago, and they made the perfect emo concept album for freezing nights. It can get a tad cheesy at times, but it's one of the best CD's to ever come out of Wisconsin. If you find it at an exchange store, buy it.

This weekend, I plan on staying warm and snowed in. I'll mill around the house, call my Mom, write a new batch of Boycott Unity cartoons, and pay all my bills again. This is the extent of my ambition when the snow starts to pile up.

I'll be back this weekend with more interesting things to say. Seriously, I have many stories to tell. No more of this shoegazing boring crap for a while, It's time to get down to business. Isn't that right, Vlad the Impaler?

(Note: This post was typed in the middle of the night by a very tired Ryan. Forgive him as he drifts along, seemingly making an effort to sound like an autistic person. Do not judge him by this writing alone. In fact, do not judge him at all. Ever.)

It's about 1am on Monday morning, and I can't sleep to save my life. 3-day weekends are a wonderful thing, but they tend to ruin your physical clock when it comes time to set it back to your work schedule. Nonetheless, I shall catch up on my sleep sometime tomorrow, and be good and rested for the shortened work week.

Before I get to anything else, I'm urging you to make The Arcade Fire's "Funeral" your next CD purchase. They not only live up to their own hype, but they far surpass the hype of all the others in 2004 (you hear me talking, TV On the Radio?). Give them a chance, the album is flat-out beautiful. My only regret was not buying it sooner. Speaking of music reviews, I'm waiting patiently for my CD review to grace the pages of Core Weekly. Once it shows up there, (or if I get immediately canned) I'll let you know.

I have the song "Experimental Film", by They Might Be Giants in my head right now. The song is hilarious, mainly about experimental college filmmakers and how amazing their first movie is going to be. They have a "music video" up at Homestar Runner, featuring Strong Bad and company. It contains all the usual "experimental" film aspects: Sad guys looking into bathroom mirrors, bare swinging lightbulbs on strings, not a script to speak of, and so forth. It's a shame that my first movie fell through, because I really wanted to prove you could make a zero-budget college film without falling into that asinine trap of gratuity for the sake of "art". It can be done, it just needs talent without the pretention. Just because you own a gun doesn't mean that you have to shoot somebody with it, and just because you're making your own movie doesn't mean that you shouldn't be able to watch it with your Mother. Just my opinion.

Since we're on the topic of me being better than most, I'll have you know that I'm working on a children's book. You can keep your weird for the sake of being weird, because I'm doing something for the kids! I'm setting my goals nice and low, so it should be all done by Halloween. I also plan on doing something in the distant future with Boycott Unity. I'm trying to keep myself completely immersed with writing and whatnot, because if I stop for more than a second I'll realize that writing is not my real job. Then I'll have to take a realistic look at my actual job that's going absolutely nowhere, and I'll have to hang myself in the laundry room. So, until I say otherwise, I'm a professional writer that works in the Mailroom of a state agency strictly for the life experience.

Can you tell that I'm getting tired?

I donated $50 to Planned Parenthood of Dane County, which will be coming out of my work wages over the next few weeks. I didn't bring this up because I wanted praise (I do), I just wanted to prove that I actually put effort into things I believe in. I didn't give any money to the Tsunami relief fund, because I doubt any of my cash would make it to where it was needed. Even so, natural disasters are something that you just have to deal with as they come. They can't be prevented or controlled whatsoever. It was horrid and awful what happened, surely one of the worst disasters we will see in our lifetimes, but no dollar amount will ever suffice regardless. But if my money can go into helping out one confused girl, or prevent one more unwanted child from getting lost in the system, that will make a world of difference to someone around here. You can't put a condom on a tidal wave, but it can still prevent a disaster. Hey, I'm going to pitch that catchphrase to the Durex people, maybe they'll cut me a check.

I'm obviously ready for bed now. I have to get undressed in the living room though, because I'm afraid if I wake up the Missus with my stumbling around, she'll kick my ass. She sleeps so heavily though, I could probably get shot by an intruder and she wouldn't even shift. She kicks and punches in her sleep so much, I'm suspecting it was her who caused my neck injury last week. (I pulled a muscle in my neck, and couldn't move it for 3 days. I was a vegetable, and I couldn't shower or wash my hair.) I very clearly remember her opening her eyes one night, looking directly at me, and punching me in the face. Now, that couldn't have been an accident.

According to her, I freak the hell out in my sleep. I scream, whimper, swing myself around, laugh like a serial killer, and even slip into an impression of a southern preacher (Jee-sus-ah!) Perhaps we should videotape this, although she told me that it wouldn't be very funny, only scary and confusing to me. God bless her, so knows I'd be afraid of myself. All I know is that if I hurt myself sleeping like I did last week with my neck, I might as well buy a good motorized wheelchair right now, because I'll be worthless. (Sweet Je-sus-ah!)

I told you I was going to bed an hour ago, but here I am talking your ear off. That reminds me of old Middle School phone conversations with people. Refusing to hang up until the other person hung up first, actually falling asleep on the phone, your ear swollen and red from mashing the receiver against it for 6 hours. That might be why I hate talking on the phone now that I'm older. Have you ever fallen asleep while talking to someone? It's the strangest feeling in the world. Just hang up and go to sleep!