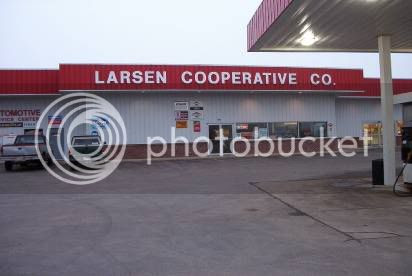 I had previously worked as a bartender at my Dad's tavern down the street (which was ridiculously illegal). It was during the Packers 1997 Super Bowl Season, and he needed extra help during games. Eventually, I got sick of him not paying me, and quit. Through my Mother's wishes and phone calls, I got a job at the Co-Op, originally to scan product codes into their new computer system. They had moved from an old building, where they kept all records on paper, and didn't believe in registers and electricity. I think they were the last store in the north to finally stop accepting pelts as currency.

So I spent the summer of 1998 in this building, amongst a large mound of tools and cheaply-priced knick-knacks, attaching bar codes to them and entering them into the system. Somewhere along the line they decided I would be a good cashier, so when the store celebrated their grand opening in August, I was the first person the customers would see. I knew everyone in our small town (maybe a few hundred people, tops), and my friends would occasionally stop by to harass me and muss up my candy bar arrangements.

As a cashier, I had it pretty easy. My manager was an intense workaholic, and did everything on his own. He expected me to stay behind the counter all day, and do nothing else but check people out. There would be 8-hour days where less than 50 people would come in. I got in the habit of bringing my Game Boy along, or posting long-winded essays on the Mediocre At Best message board. On Sundays, I would drag the television out from the back room so I could watch football while the store was open. I could have literally shot a movie there during normal business hours, and now I really wish I would have. I was planning on calling it, "Clerks: the good version".

This was my first real job, and it was basically for me to stand in one place for 8 hours, carrying a bag of bird seed to someone's car every now and then. Being the center of town, people would stop by just to talk. In the 4 years that I worked there, I became somewhat of a bartender without alcohol. I listened to people's problems, handed out advice and receipts, broke up fights and threw people out. I saw things that I never want to see again, and actually almost lost my life on more than one occasion. I never thought that so many stories that make up my personality would come from this one building when I was a teenager.

My first chapter will come this weekend.

Mr. Electric Shock!
We've got some catching up to do. Afterwards, there will be juice and cookies.

1. I turned down a job offer at the Department of Administration here in Madison. The pay was better and it was a significant promotion, but in the end wasn't enough to constitute an entire career change. I'm content enough where I am, and I'll wait until something better comes along. I don't want to hear anyone accusing me of being afraid to take a chance. I mulled over this decision for a week before coming to this conclusion. If anything, accuse me of being too lazy to learn another skill for not even a couple hundred extra bucks a month. I'm not starving to death, I frankly don't need the money that badly. This does mean, however, that I can no longer complain about my job. I'm going to miss that.

2. Still reeling from the immense success and popularity of my first review for Core Weekly, my second review will be featured in next week's issue. I'll be tackling Goldfinger's "Disconnection Notice". Between you and me, I don't think it's going to go very well. Send all hate mail to communistdance@yahoo.com.

3. Speaking of Core Weekly, they just sent me my first paycheck today. Keep 'em coming! With the money they paid me to write a single review, I barely filled my car with gasoline. But check this, it was premium.

4. American Idol's Scott Savol looks just like Pyle in Full Metal Jacket. Like Pyle, Savol is fully capable of snapping at any second. He can sing like nobody's business, though. He's the only contestant I'm truly cheering on.

5. Tonight's episode of Mythbusters tested the theory of the "Brown note", a specific sound frequency that makes you lose control of your bowels. Didn't work quite the way the story says. Every one of my teachers at MMI were wrong. I paid $22,000 for those cobs to tell me that a 6-cycle hum would make you crap your pants. Had Mythbusters existed 3 years ago, I probably wouldn't be paying these student loans.

6. My hair continues to grow. I will get another dye job tomorrow evening.

7. Check out the newest addition to my living room: 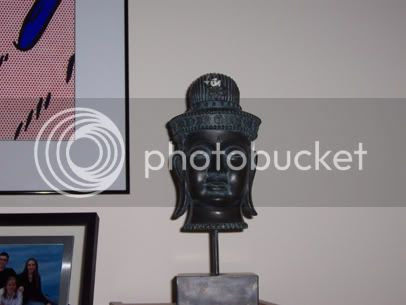 Of course, now my apartment is haunted, but it really fills out the room nicely. It's pretty big. In case you're wondering, that's a Lichtenstein print in the upper-left corner, and a picture of my family in the bottom left. I try to keep my belongings as geometric and symmetric as possible.

8. This weekend, we're headed back home again for my Grandmother's birthday. February marks not only her birthday, but the birthday of my late Grandfather, as well as what would've been their 48th wedding anniversary. We're getting everyone together to have a good time with her, and try to cheer each other up in the process. I bought her a Patsy Cline CD.

9. I put up a link in the "listen!" section for The Arcade Fire. I don't want to talk about them, and I don't want you to talk about them. All I'm asking is that the next time you're looking to buy a CD, but don't really know what you want, please give their debut album, "Funeral" a try. That is all. Their official page is a complete mess right now, so if you want information on them, just search around when you have some free time.

10. I don't really have a 10th thing to talk about. It's just that a 10-item list seems much more complete and important than a dumbass 9-item list. Here, let me think of something else that I could tell you...I bought a new shirt a couple days ago. It's brown. Fits me perfectly and compliments my eyes. 15 bucks at Target.