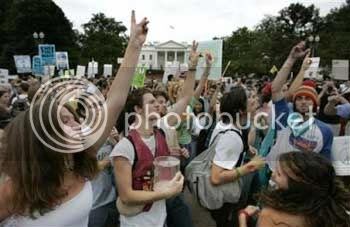 "We are losing our best and our brightest in a country that we are destroying that was no threat to the United States of America. Iraq was and still is no danger to our safety and security, or to our way of life. The weapons of mass destruction and mass deception reside in this town: they are the neocons who pull the strings and the members of Congress who have loosened the purse strings with reckless abandon and have practically given George and company a blank check to run our country into monetary and moral bankruptcy. We are out here in force today to take our country back and restore true democracy and sanity to our political process. The time is now and we are here because we love our country and we won't let the reckless maniacs destroy her any further."

"George, this is our rainy day and you have failed us miserably." 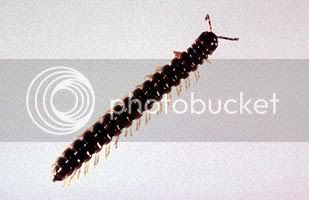 I was leaning against the door frame of a co-worker’s office, chatting about Lost, when I heard someone yelling my name from across the room. A quick scan of the cube farm brought my gaze to a young intern named Anna. She was staring a hole in my head.

“Come here, quick!” she said, muffling the receiver of her telephone, which she was simultaneously using while summoning me.

I quickly skipped across the perimeter, approaching her cube and wondering why on earth she would need me so urgently. Anna and I don’t really talk to each other, as she resides on the second floor; I only go up there to talk with people about things like television and beer. As I peeked into her cube, I saw that her face was a light shade of red, and she was slowly tucking her knees under her chin, folding herself up in a fetal position on her chair.

“What’s going on?” I asked, sincere and mystified.

“There’s a…aaaugh!” she shot back, sticking her right leg straight out and kicking her desk drawer shut to reveal a millipede inching along the wall of the cubicle.

I should have expected nothing less. I’ve been the designated killer of insects and vermin since I started working here over a year and a half ago. It wasn’t that I necessarily minded the side job; it was just disconcerting to know that Anna was aware of this role that I played. It’s not something I’ll be using on a resume anytime soon. Nonetheless, I grabbed a few pieces of Kleenex from her embroidered tissue cozy and did what needed to be done. After a deep sigh, she thanked me.

“You know,” I said to her, “when the step ladder was invented, I was convinced that women no longer had any use for men, seeing as they could now reach high things on their own. But as long as there are spiders around, I’ll always mean something to someone. It’s why I’m married.”

Anna laughed, I didn’t look like too much of an ass, and I gracefully left the second floor like a war hero. I was feeling pretty good about myself, and thought that it would be a good time to eat lunch. After all, nothing celebrates the murdering of an innocent millipede than by enjoying a butterscotch Snak-Pak.

I shut the door to my office and settled in for 45 minutes of silence and eating. On the menu today was a plate of instant macaroni and cheese, two butterscotch Snak-Paks, a single serving of cinnamon applesauce and a bottle of Aquafina. It’s surely no surprise to you that I am the picture of health for a 23 year old. I put on a Talking Heads album, and started reading the newest issue of the Onion, which features a fantastic interview with documentary filmmaker Errol Morris.

It should be noted that, since my promotion, I’ve been residing in my own personal office. I’ve temporarily graduated from cubicle half-walls to wood paneling and an honest-to-God door. I’m not bragging by any means (I said it’s temporary), it’s just pivotal to the story.

I had just gotten to the part of the interview where Mr. Morris was discussing his oscar-winning The Fog Of War, when I heard the buzzing. It sounded like one of the fluorescent lights had suddenly gone wonky, so I looked up for an inspection.

It was then that I saw the largest horsefly I had ever seen. He was clinging to the low ceiling, focusing on me with his 90-some odd eyes, and humming like a massage chair.

Allow me to interject for a brief moment.

Is it at this point where most rational people would open his or her office door, allowing the lumbering beast to exit the room with a minimal level of welts and bloodshed. I, however, am not a rational person. I was smart enough to know that once I opened my door, I had immediately absolved any and all existing lunch rights, and people would start bothering me with work again. To open the door would mean to lose my temporary sanctuary, and I was not willing to give this up. Not today.

The horsefly was in for a fight. I nick-named it “Buzzy”.

I slowly got up from my once-peaceful lunch, rolling up the newspaper behind my back, so Buzzy couldn’t see what I was doing. He was looking at me, trying to figure out what he could do to finish my macaroni and cheese. I was hungry though, and with the killing of a millipede still fresh in my mind, I wasn’t in the mood to share.

I took a half-jump into the air, skimming the ceiling with the newspaper. I missed Buzzy by at least a yard. He took off, but in a 7 by 8 office, he didn’t have too far to go. He flew over to a side wall, trying to blend into a map of Wisconsin that the previous employee had taped to the wall. He was perfectly still, residing near Janesville on the map when I spotted him.

I wound up and took a mighty swing at Buzzy, whiffing entirely and colliding with my applesauce on the backswing. Buzzy once again fled the scene, but my Mott’s single serving wasn’t so lucky. I made the unfortunate mistake of taking my eyes off of Buzzy for a fraction of a second, making sure that the applesauce wouldn’t spill on the floor (it most certainly did). I no more than turned around when I again made eye contact with this massive sting monkey, making a complete beeline straight for my left eye.

It’s not often that a gnat decides to attack you, but I believe that he saw the urgency of the situation. Buzzy knew that one of us was going to die, and he rightfully didn’t want it to be him.

Seeing this bottle-cap sized, winged disease machine attempt to kamikaze itself into my ocular jelly sent me into a panic. I yelled out loud and dropped to my knees in an attempt to dodge the beast. I blindly and frantically tomahawked into the air with my newspaper, Talking Heads calmly muffling the sounds of the horrid struggle now taking place in my office. I raked my fingers feverishly through my hair to see if Buzzy had decided to burrow himself into my scalp. By doing this, he could camp out for the day, and kill me as I slept this evening. Smart horsefly.

As I stumbled back to my feet, I tried to collect myself. I used the spilled applesauce as a crude war paint for my face (okay, so I didn’t), and stood perfectly still. I quietly reached over to the stereo and paused the disk, listening intently for the trademark hum.

“Come on, Buzzy,” I whispered. “Show yourself.”

Once again, I caught him in the corner of my eye, making another mad dash for my face. I took a baseball swing at him and connected, sling-shotting him across the room and onto my computer desk. He lay there, twitching and missing a leg, but very much alive and dangerous. I gave him another shot for good measure, and he stopped moving. I didn’t want to touch him, so I used the sticky end of a Post-It note to transport Buzzy into my trash receptacle.

Exhaling deeply, I cleaned up my mess and tried to put the trauma behind me. I didn’t have anything to read now, but I could still finish my lunch because….

What the hell was that noise?

Looking over to the trashcan, I saw Buzzy crawling up the side of the discarded newspaper. I swear to you that he was flipping me the bird. Horrified, I threw my spilled container of applesauce at him, and he disappeared. He’s was no longer in the trashcan, and he wasn’t anywhere else in the office either. He simply disappeared.

That meant that he was on me. He had returned from the grave to finish the job.

Whipping myself into a frenzy, I did a rain dance in the office, pulling all of my clothing in every direction while messing up my already psychotic-looking hair. No sign of Buzzy whatsoever.

He made it out. He beat me.

Flabbergasted, I threw myself onto my chair and blinked hard. This was karma for killing that millipede earlier. I tampered in God’s domain, and I got what I deserved. In this case, what I deserved was to be mercilessly tormented by a horsefly the size of an apple fritter.

Well, back to work.

So, what are you reading right now?
The Big Bento Box of Unuseless Japanese Inventions
The Book of Sudoku

So, what are you listening to right now?
Clap Your Hands Say Yeah - Clap Your Hands Say Yeah
Broken Spindles - Inside/Absent
The Weakerthans - Fallow
The Good Life - Album Of The Year
(Various) - Bad Scene, Everyone's Fault: A Tribute To Jawbreaker
The Beatles - A Hard Day's Night
Piebald - We Are The Only Friends We Have
VCR - VCR
Talking Heads - The Best Of Talking Heads
Beastie Boys - Paul's Boutique

So, I have a question for Mutton Chop.
Send it to communistdance@yahoo.com

So, I have a mixtape suggestion.
Send it to communistdance@yahoo.com

So, I have a question about something else.
Send it to communistdance@yahoo.com

So, when does Lost start again?
Tomorrow (Wednesday) at 8:00pm central time. It's proceeded by a Lost special at 7.

So, what's going on elsewhere in the CDP network?
The Girl From Mars shares her unhealthy obsession with Harry Potter.
Let's Eat Paste finds spooky contraband in a spare bedroom.
I Think This Is My Exit gets nostalgic and talks like a Pirate.
Teaonnie goes to military prison.
Finding Yourself Despite Yourself runs down her weekend.
Todd's Cavalcade Of Whimsy takes pictures in public places.

So, how do I get linked on the CDP?
Just link the CDP on your own Blog, and let the reciprocation begin. That, or come up with something that impresses me enough to link you. Send requests to communistdance@yahoo.com.

So, tenth and finally, what's coming up on the CDP?
COMING UP: Rejected Advice Columns.