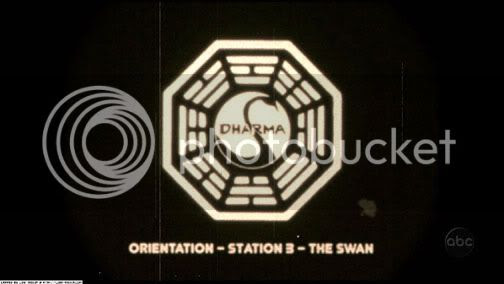 1. Starting today, the CDP is launching "Lost Friday," which will be a place to dissect and discuss Lost as the weeks roll along. Every Friday, the CDP will put up a new post devoted to the latest episode.

2. In honor of "Lost Friday," you'll notice an entire sidebar section devoted to Lost links. Check them out, as they are full of information and always being updated. More to come.

3. I officially have absolutely no idea what the hell is going on. 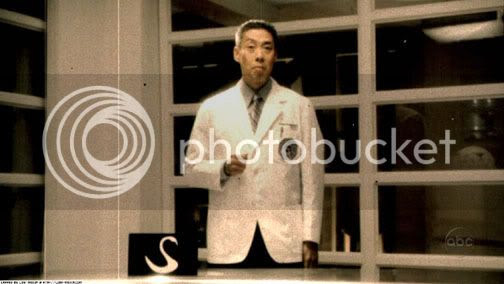 I mean, seriously. I was looking forward to this episode (Episode 3: Orientation) for weeks now, as I knew that a "major plot point" about the hatch would be spilled. True to their word, the hatch was explained in great detail. They explained what it was, why it was there and what it was used for. Any fan of the show would be ecstatic to find all the answers to these questions so early in the second season. Of course, by the time the episode was over, I had a thousand more questions that were far worse than before, and I needed to chug a bottle of NyQuil just to go to sleep. 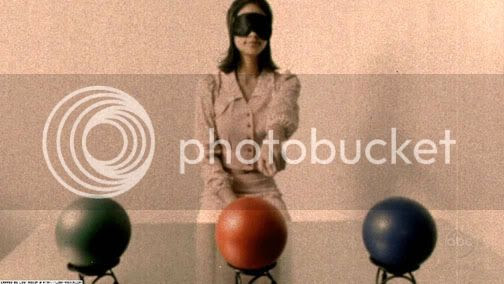 In less than an hour, the show went from a stripped-down island mystery to a completely different world altogether. Based on the decisions the hatchlings made at the end of the episode, they set themselves up to be there for a very long time. And the orientation video? This was the most bizarre thing I've ever seen on primetime television. 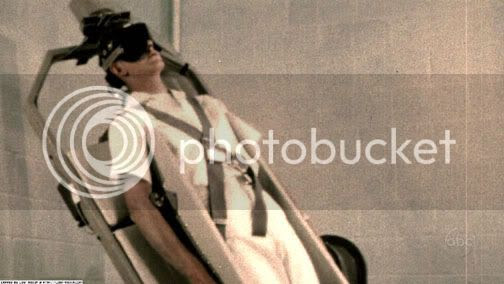 It was a mix of "The Ring" and a Nine Inch Nails video. It was evil and wrong, as is Dharma Industries and the Hanso Foundation. Let's do a quick fact and near-fact run down:

1. The hatch is station 3 of 6, known as "The Swan." This base was (is) used for Electromagnetic studies. The other stations were used for Psychological, Parapsychological, Zoological, Extraterrestrial and Utopian studies. We don't know if all of the bases are on the island, or if the island itself is a base. Then again, we don't know if it was ever meant to be used for those purposes.

2. On the "official" page for the Hanso Foundation, the studies listed are the following:

You can already see how these all tie in with existing circumstances on the island.

3. Jack was being a real ass this week, but I hope that he's right. Perhaps Desmond got lured in there by Kelvin and the rest to participate in an experiment to see if you could scare someone into pushing a button for the rest of their lives. By not having enough faith in himself (a recurring theme, and the reason for his yet-to-be-shown divorce), Jack may have sealed his fate for the time being.

4. Locke showed some depth this week, too. By revealing that it took him a long time to accept certain things in the realm of faith, we see him as more of a human than a destiny-driven lunatic. His relationship with Helen is still up in the air, as she may not be the same Helen we heard him talking to early in season one. Also, could Locke's "father" turn out to be the "Mr. Sawyer" that conned Sawyer's parents so long ago?

5. Next week's episode will center around Hurley. We will find out why he was in a psych ward, and hopefully get some more insight into these numbers. Speaking of which, 108 is the sum of the numbers, and they must be entered into the computer every 108 minutes. The base groups were supposed to switch teams every 540 days, which is 108 multiplied by 5.

6. The "others" that captured Michael, Sawyer and Jin are the tail-section survivors, and we will find out more about them in a few weeks. They will get their own episode explaining their first 40-some days on the island, and their encounters with the "real others". 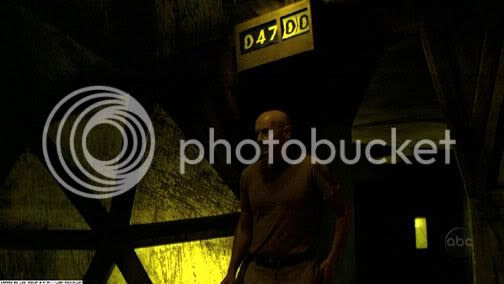 7. Remember "Adam and Eve", the corpses found in the caves with the black and white game pieces in their pockets? Well, that same game was in the hatch, meaning that they could have been the initial two people assigned to the hatch. Did they decide to bail out on the experiment, only to get "sick" and expire out there?

8. Remember the shark with the Dharma logo on its fin? This could point to the theory that the entire island is a controlled environmental experiment, with the survivors as subjects. It was obviously planted there by someone.

I'm flabbergasted. Watching this show should be a full-time jorb. When Jack and Locke finished watching the Orientation video, Locke said "I think I'm going to have to watch that again." I'm positive that about 15 million viewers said the same exact thing. 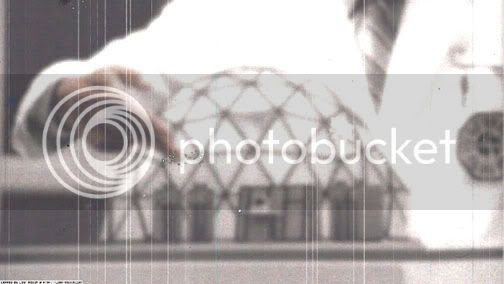 I could go on, but I'm exhausted for tonight. I hope you enjoy "Lost Friday." I'm doing this to keep my Lost posts to just one a week, but to also have a central place to discuss the current episode without it spilling into every other nook of the CDP. Check out the links and let me know what you think.

Make your own kind of music. Have a good weekend.

(PS- I'm working on the unsightly blank ad space at the top of the page. Ignore it for now.)

Rejected Advice Columns.
The CDP believes in quality journalism at bargain basement prices. In the case of our advice columns, this is no different. Before we decided to syndicate Ask A Cheap-Ass Pirate, we received several requests from other well-respected and popular columnists. These columns were either slightly below our lofty standards, or just lacked something necessary to "fit in" with the writing style you have grown to love here.

Not being one to pull the wool over your eyes (or see the chance to take a day off from writing), we've compiled three of these rejected advice columns for your viewing pleasure. This way, you can see for yourself why they didn't quite hit the mark. Enjoy! 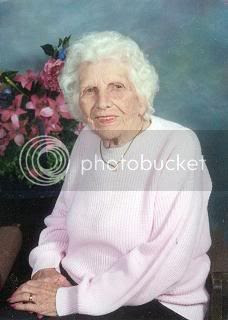 By: Doris McCovey, retired Grandmother of 18 children in Sheboygan, WI.

I want to break up with my girlfriend, but I’m afraid that it will send her into a horrible depression. Is there any way I can let her down easy, and still keep the friendship?

Thanks!
Somebody Loves Me

Are you hungry? You look hungry. Here, sit down for a second and let me make you some french toast. What? Nonsense, you have plenty of time. Well, if your friends can’t wait five minutes for you, then those aren’t friends that you want to have, dear. How can you wear a t-shirt in this weather? You’re making me cold just looking at you. Here, wear Grandpa’s old sweater while you eat. Balderdash, you’re freezing! Look at you, shivering like a leaf. There you go; don’t you feel better now? 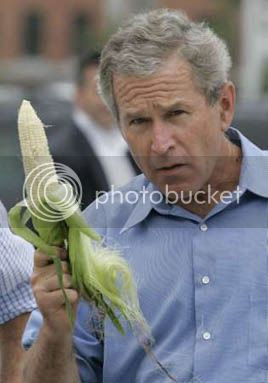 By: George W. Bush, President of the United States of America.

The situation in Iraq is getting worse, with no signs of slowing down. Recent natural disasters exposed the embarrassing lack of preparation in dealing with emergencies, and your approval rating declines with each passing week. What’s your problem?

Warmest Regards,
Scared Of You 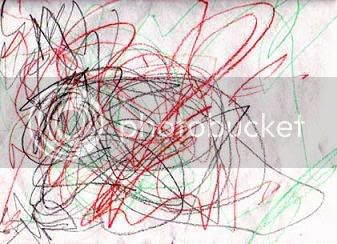 Rejected Column #3:
Ask A Guy Whos Head Is About To Explode. 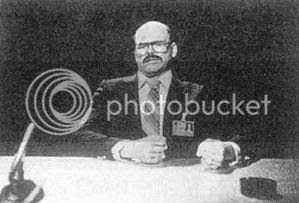 By: Thomas Frederick, A Guy Whos Head Is About To Explode.

Dear Guy Whos Head Is About To Explode,

Do you have any safe driving tips for the upcoming winter months? 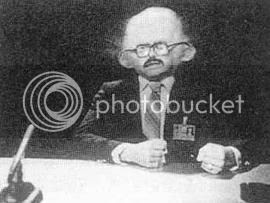 Excuse me for a second. 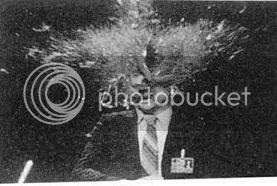 Well, there you have it. Don't forget to watch Lost tonight, and cheer on the Red Sox. They lost game one 14-2, so they're going to need it.

This Is Just Mean.
"I'm illiterate", Fantasia reveals in memoir. 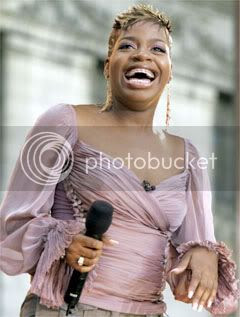 NEW YORK -- American Idol winner Fantasia Barrino(1) reveals in her memoirs that she is functionally illiterate and had to fake her way through some scripted portions(2) of the televised U.S. talent show, which she won in 2004.

The 21-year-old R&B singer says she's signed record deals and contracts that she didn't read and couldn't understand(4). But the hardest part, she said, is not being able to read to Zion, her four-year-old daughter(5).

"That hurts really bad," she said, adding that she is now learning to read with tutors(6).

Thanks, Fantasia. Allow me to interject.

(1) - Fantasia should have never won American Idol 2004. With LaToya London and Jennifer Hudson in that cast, Fantasia winning was nothing short of an American tragedy. She sounds like a mouse with emphysema, and looks worse. From the first time I saw her audition, I knew she would probably win regardless of talent, due to the fact that the voting public consists of a bunch of idiots. (See Presidential election for more clarification).

(2) - It must have been hard to fake your way through the Shakespearean nightmare that was American Idol. How hard is it to memorize "Drive Ford! Drink Coke!" every week for 8 months? She stumbled over her cues week after week, and nobody seemed to care. What did she do to bamboozle the audience like that? Nerve gas? I think it was her hypnotic mouth, which was capable of un-hinging its jaw and swallowing an entire 747 in a single gulp.

(3) - That's the stupidest thing I've ever heard. That quote just made me want to be illiterate.

(4) - Like she would have understood them had she known how to read. Don't lie to me, Barrino. You dropped out of school when you were 17. How you made it that far being illiterate should have earned you an award in ignorance. I'll give you that. I went to school for music production, and I could barely understand those contracts. That's why you have lawyers who read them for you.

(5) - At the very least, Zion will be able to read her Mother's memoirs...back to her Mother.

(6) - Run, don't walk to Barnes and Noble to pick up an autobiography written by someone who won't even be able to read it. She needs money, because her album didn't even draw flies.

This is a mean rant, plain and simple. From a purely superficial and celebrity-based viewpoint, I can't stand this woman. It has nothing to do with race or gender, she just makes me dislike my generation all the more (which is getting harder and harder to do). The fact that I put so much stock in reality television to make a fool like Fantasia freaking Barrino ruin my day, proves that I'm a bigger loser than her, hands down.

It reminds me of the episode of the Simpsons when Krusty the Klown quits show business. Bart and Lisa are trying to convince him to return to the small screen:

Bart: But, Krusty, what about all the kids who depend on you to brighten up their afternoon. Are you gonna turn your back on them?

Lisa: What about the great feeling you get from knowing you're better than regular people?

Bart: What about being an illiterate clown who's still more respected than all the educators in the country put together!

I couldn't have said it better myself.
(Send hate mail to communistdance@yahoo.com.)

(PS- The CDP will be attending a television test screening tomorrow evening. Reviews will follow.)