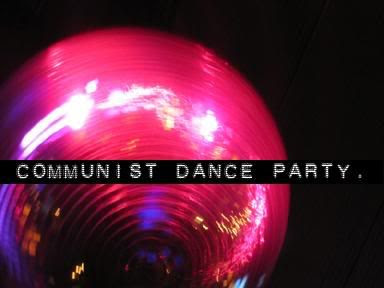 I walked into the Spring Homecoming dance alone, but I was planning on leaving a man.

True, I had no date and arrived with a bunch of better-looking people who did, but that was all sure to change, because tonight was the night! This was the night that I shed my inhibitions and stopped listening to common sense and reason.

No longer would I be the nice guy, the PG-rated guy. The guy that the ladies would talk to when their boyfriends were being selfish and unfaithful, only to leave me for their arms when I quelled their salty tears. No way. From now on, I would be the guy who did the dishing out and taking, and women would line up in front of me, begging to be stepped on and hurt again. My high school legacy had just begun, and I knew I had an opportunity to write it as I pleased.

The night belonged to me!

I was mentally and physically prepared to rule that night. My super-tight, tapered slacks subtly led your eyes up to my oversized beige blazer, sporting shoulder pads large enough to be endorsed by the Miami Dolphins very own Larry Csonka (Super Bowl VIII MVP; 'you've been czonked!'). A simple black t-shirt underneath said, 'I'm trying, but not hard enough to look sad and desperate.'

Topping off the ensemble was my not-so-secret weapon, six tablespoons of Old Spice, strategically dallopped and slathered in various locations on my body.

I reeked. I also looked sad and desperate.

This night also predated my 5-year stint with braces, mind you, so my teeth looked as if they were retreating from the front of my mouth, turning inward and making a beeline for my uvula. I was drenched in flop sweat before I even walked into the dimly-lit gymnasium, and it was 40 degrees out. My finely-groomed group started to congregate and form a semi-circle near some bleachers, while I began the hunt for the woman that would change my life. 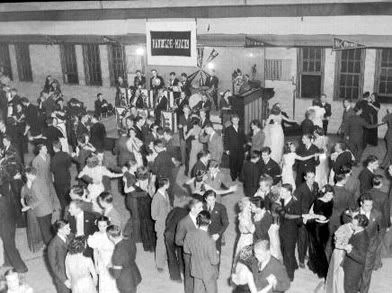 The night was no less than 10 minutes old, and I was about to get the crap beaten out of me.

I ran into a female friend whom I shared a spot with on the school bus. Living in a small town 30 minutes from school, you had no choice but to ride the bus until you got your driver's license. This girl, who we'll call 'Sadie,' had brought along a friend from another school; we'll call her 'Marie.' Sadie introduced me to Marie and the three of us started talking. Sadie was nice like that; always looking for someone to set me up with, and Marie was right in my wheelhouse. Why me and Sadie never hooked up was pretty obvious, considering that she smoked more weed than Woody Harrelson at Burning Man. No, thank you.

Knowing that Marie had absolutely no idea who I was, I used this time to try out my newfound attitude towards the art of seduction. I told her I played guitar and was an accomplished songwriter; perhaps I'd write something for her someday. She giggled and brushed against my blazer, her eyes lighting up like a Christmas tree as I continued to lie through my crooked teeth. I was definitely on to something. I could see a very short, awkward and dishonest future with her, and I was okay with that.

After chatting for a few minutes, someone else needed my attention for a bit, so I excused myself from Sadie and Marie, making sure to let Marie know how much of a pleasure it was to meet her. I turned to step away when Marie grabbed me by the arm and spun me back around. 'Where's my hug?' she asked, eyes glistening. Amazed at how quickly this new method was working, I gave Marie a most tender hug and swaggered away, confident there was nothing that would keep me from the prospect of more hugs in the future. 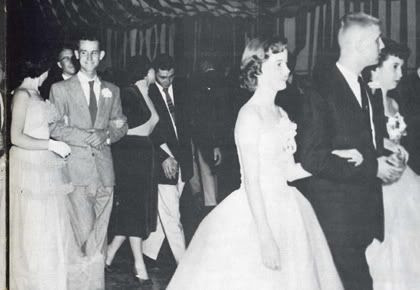 I went over to talk to the person who requested my attention; a girl we'll call 'Becky.' Becky had lost one of her high-heels, as one of my friends thought it would be a witty jest to hide it on her. She wanted to know if I had seen it, and I told her I would look around. I walked around the perimeter of the gym, pushing around chairs and bending under tables. Eventually, I found her lonely shoe under the chair of a huge man I had never seen before. My school was rather small; we all knew everyone, and this guy certainly wasn't from around here. He looked like Jesse 'The Body' Ventura, and was very mad for some reason.

'Excuse me,' I said, 'Can I grab that shoe from under your chair?'

Just then, I realized why this guy looked so big. It was because he was sitting on some guy's lap. Someone even larger than him; and he was being restrained. Poorly.

'You're f***ing dead! DEAD!' He screamed, as the man under him kept a tight bear hug on his frame. The angry guy squirmed and swung for a few seconds before the guy restraining him said to me, 'Go dude, just go!'

For a few seconds, I didn't even realize that the guy was yelling at me; it just didn't make any sense for some reason. I quickly kicked the shoe out from under the chair and got the hell out of there. I got about five steps away when I heard more commotion. It was the big guy dragging the angry guy out of the gym, still furious and more than ready to crack me like an egg.

That's when it all hit me like a high-heel to the face. I had been played like a fiddle.

You see, that was Marie's boyfriend. Knowing full well that he was watching her from afar after a fight they had, she used me to get back at him; flirting and hugging me solely to piss him off and send him into a textbook rage. Her and Sadie had set the whole thing up; laughing at my stupid jokes, nodding at each well-placed lie. I knew it was too good to be true, but I didn't listen to my gut and I almost got killed because of it.

Look no further for proof that women are messed right the hell up. Instead of just telling him that she was mad and running the risk of ruining the night for herself, she ruined the night for two guys instead, one of them a completely innocent bystander. That's not even close to cool, and I would never do that to anyone.

Then again, was I really all that innocent? After all, I did lie to her about almost everything. While trying to remain in charge of a courtship through dishonesty and hormone-driven motives, I got strung along and hung out to dry like millions of other losers just like me. I deserved it; it scared me straight. If women are messed up, it's because men lead them to it.

I was shaking in fear for the next 15 minutes, looking over my shoulder and asking anyone who would listen to check and see if the guy had left. To be entirely honest, my night of manly retribution and female attraction wasn't going as well as I hoped, but the night was just getting started.

At least I got Becky's shoe back.

Comments:
This comment has been removed by a blog administrator.

This comment has been removed by a blog administrator.

RJ, I was thinking of you when Campbell knocked out Umburger during the Sabres game. Wild.

Yea... I laugh every time I see the replay. Even posted it on my page!

I watched it 20 times. The reaction from the announcers was priceless.