Don't You Know Who I Used To Be? 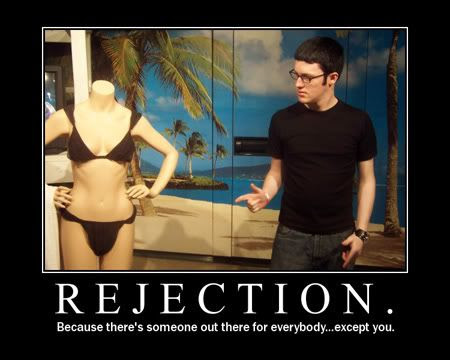 Yes, I made this.

Yes, I'll be turning it into a poster and selling it at the CDP Webstore. You really should stop buy and purchase something from there. Madden 'o7 is out now, and quite frankly, I don't want to pay for it with my own money.

Let's move on. I wanted to bring you up to speed on what to expect from the CDP over the next few weeks. As the summer dwindles away, the CDP is getting ready to launch into the fall TV season with a slew of new material. I've been jacking myself up on multivitamins and Red Bull just to get back into proper Blogging shape.

First off, the CDP Fall TV Preview arrives next week. It's huge, ambitious and huge. If it looks interesting and is airing on TV this season, I'll be talking about it. I'll also be letting you know what the absolute worst new shows on television are as well, saving you from wasting as much time as I tend to do on a daily basis. Look out for that, it's gunna destroy you.

Outside of the CDP, me and the Missus are moving to a new place on September 1. This is obviously going to take a lot of work and whatnot, so I won't have a lot of time to post during the month of September. So it makes sense that I'll be taking on my most ambitious project yet during that time. Wha? Zuh?

You see, I will be devoting the entire month of September to the Top 30 CDP Posts Of All Time. There will be posts every single day of the month, counting down the best the CDP has ever had to offer over the last few years and 430-some posts. This will all culminate at the end of the month with the #1 post of all time and the long-awaited LOST SEASON THREE PREVIEW, launching us head-first into the fall TV season.

The countdown was chosen by the only person that matters- me. To recap:

Don't you be goin' nowhere. Sound off in the comments section and tell me how good my marketing skills are. Then, head on over to the CDP Webstore for some swag.

Comments:
I thought about making some fake inspirational posters like that last week. The possibilities are (nearly) endless.

Yeah, I have an endless supply of photos like that, so I could make posters forever. 4EVR!

I also want to let people know that in the first paragraph, I replaced 'by' with 'buy' on purpose. It was a subliminal marketing tool, and it's working like a dream.

Don't pay for Madden with our money, either. Pretty big disappoinment (again) for the 360. Gameplay is much better, but the franchise mode is full of bugs/holes/atrocities. I'm going to set myself on fire and run the wrong-way on the train tracks.

Damn, what a letdown. Sorry about that. '06 is amazing; maybe I'll just keep playing that for the time being.

Who am I kidding? I've been playing Guitar Hero for a month straight, with no signs of slowing down.

Sadly, speaking of video games, I've been playing my old SNES version of SimCity. I have no idea why.

Quick question: how much money do you actually make on items at CafePress?

Thanks, JT. I was cracking myself up last night thinking of captions for it. As soon as I bump this over to CafePress, I'll order a copy for my cubicle. I suggest everyone else do the same.

SimCity rules, especially the old-skool SNES version. Every few months, you have to just set your new games down and go back to the basics.

Aaron, I adjusted the CafePress settings so I make a few bucks off of every purchase (literally $1-$3 per item). I could make more, but that would raise the prices, and I care more about people having the merch than me making money off of it. It won't allow me to retire anytime soon, but it allows me to make neat merch and spread my message of global domination.

So yeah, if you're just looking to donate money directly to me solely because you think I rule and deserve it, I'd suggest doing it through the DONATIONS link. Besides, I'll send you free stickers and stuff regardless.

However, that CDP merch is pretty badass (especially the ladies stuff), and I'll be going on a little shopping spree of my own this weekend.

A friend and I have several ideas for t-shirts and we're going to start selling them online. I think I'm going to go the DIY route though.

This comment has been removed by a blog administrator.

Have you seen these Star Trek "Inspirational" Posters? My favorite is the Capt. Kirk: "I'm sorry. I can't hear you over the sound of how awesome I am." (Even if you aren't a trekkie, you'll still laugh)

Great merchandise! You can probably expect a prety big order from me the next time I am drunk-web-surfing (which will probably be in a few minutes). Otherwise, I'll probably end up getting a ball-cap or t-shirt in the near future.

I had a co-worker ask me if I watched Star Trek last week. I didn't know if it was an insult or a compliment, so I just punched him in the neck.

Thanks for the merch props. I hope you find something on there that you dig.