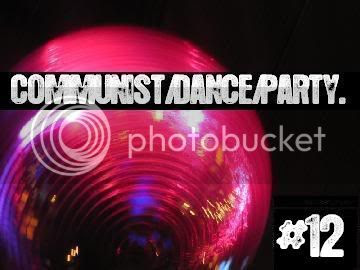 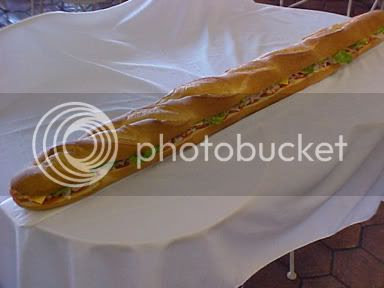 I love subs about as much as legally possible. Believe me, the law is not flexible on these things.

I'd eat them 3 meals a day if I could survive the lethal strain it would put on my heart. For my money, they are as close to perfect as food can be. You have great tasting, soft bread (Garlic Herb is my favorite), a thick, artery-sludging inch of heavy mayo, expertly sliced cheeses of your choice, fresh shredded lettuce and crisp, red onions to top off this most wondrous creation.

As I don't eat meat, that's all I take in my sub, and it's all I will ever need to be truly happy.
I could go for one right now. In fact, I'll be right back. Hang on a minute.

Okay. As I was saying, sub sandwiches make me happy. However, because they cost money and aren't good for me at all the way I like them, I've been restraining myself to only one per work week for lunch. The remaining four days, I'm stuck with frozen pasta or macaroni and cheese. Believe you me, I look forward to 'sub day' like I look forward to pay day.

In Madison, we have approximately 68 million different sub franchises. Cousins, Subway, Blimpie, Milio's (formerly Big Mike's), Sub's Ahoy!, Yellow Submarine, Tubby's Subs, Rub-A-Dub-Subs, George Michael's Sub Machine; the list goes on forever (I might have made the last few up, I can't remember). It's one of the reasons I'm never moving, along with the fact that my wife and cats live here. This abundance of sandwich goodness makes them all very hard to resist, but it has given me a great cross-section to sample and rate. I've been to every sub shack in this fine city, and have become a pro when it comes to the beautiful dance that is sandwich creation and consumption.

I'm offering today's post as a public service announcement to other fellow sub lovers. Heed my words, I'm about to make your next sub experience worlds more enjoyable. 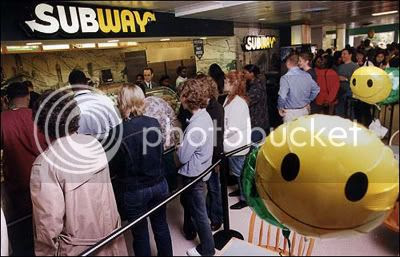 Let's get right down to it. When it comes to the bottom-of-the-barrel, lowest common denominator, absolute worst sub franchise in America, Subway wins this contest, hands-down. It may be the biggest and baddest franchise in the nation, but overall, they can't hold a greasy candle to anyone else in the game.

For starters, their portions are out of touch. They're still sticking with the tried-and-true 6 and 12-inch styles. For the same price, you can get a 7 and 14-inch sub at Cousins or an 8 and 16-inch sub at Milio's (a Dane county staple). That's an extra 4 inches for free! That should be enough right there to send you elsewhere. I've been known to cross state lines just to get the sandwich I happen to be craving at the time.

Secondly, they have the worst customer service I have ever seen (not to mention, the ugliest store design on earth). Every single time I walk into a Subway, I'm instantly reminded of why I should never go there again, and feel like I'm about to be shot in the back of the head. For some reason, Subway always seems to hire one of two types of terrible employees.

The first type is the attitude and angst-ridden high schooler. This young boy or girl hates their job so much that they refuse to even look at you during the course of the entire transaction. They talk openly about hating their job, even as they make your sandwich, and will take frequent breaks to do other things during the process. Because of their lack of eye contact, you'll need to tell them what you want on your sandwich a half-dozen times, and they'll still get it wrong. Eventually, they'll spot a friend of theirs, and spend the next five minutes talking to them while your lunch slowly spoils behind the sneeze-guard. For the time it takes them to construct this ragged masterpiece, I could have jumped behind the counter, killed everyone wearing an apron and still made the sandwich faster.

That's another thing I can't stand about Subway. The 'Sandwich Artist' buttons those employees have to wear. It's not an art form to put edible things in between bread for the purpose of consumption. Besides, I have never been handed a sub that made me want to place it behind a velvet rope for viewing. At least, not one from Subway.

The second type of employee is the attitude and angst-ridden middle-ager. Clearly, I'm not being judgemental concerning age here, because the young and old can equally suck at making my sandwiches. This specific type of person makes your sandwich with such staggering contempt and apathy, you think they're going to slit your throat or pass out, whatever's easier for them at the time. They don't even try to hide the fact that they hate you with the flaming intensity of a thousand suns.

It never fails. I'll walk into a Subway, and a 6 foot 4, 600 pound Sandwich Artist will stand there with her hands on her hips, looking at me as if I wasn't wearing pants. Head cocked, eyes wide open, just counting down the seconds in her head until she can take her break and never see me again.

(She's not making eye contact with me, therefore she's not hearing a damn word I'm saying.)

(At this point, she starts constructing my 6-inch sandwich. Without even looking up at me...)

(At this point, she looks up at me like I somehow made a mistake that completely and utterly destroyed her day. Now angry at me for supposedly changing my mind about the length of my sandwich, she exhales loudly and starts over.)

"No, thank you. Just lettuce, cheese and mayo."

(Another heavy exhale. The phone rings, and as she walks away to answer it, knocks my entire half-made sub into the vat of sprouts. Later, she pretends it didn't happen, seemingly forgetting that the barrier between the two of us is made of glass. I say nothing, for fear she will yell at me. I'm running late as is.)

"What? Nothing, thank you."

It is at this point where she wraps my sandwich up in paper, but realizes that she put way too much lettuce in it to close properly. Instead of rectifying the situation, she just flattens the sandwich temporarily and wraps it up as quickly as possible, essentially spring-loading the damn thing to surprise me later. When I take it back to the office to enjoy, I notice that the sub package is all but vibrating with pressure, waiting to explode all over me. All it takes is for me to put a slight tear into the side of the paper for the entire sandwich to come sproinging out like a worm-filled can of novelty peanuts. Lettuce and mayo covers my important documents and newspaper. Thanks, Subway.

It should be mentioned that everything I just said has happened to me at one point or another. 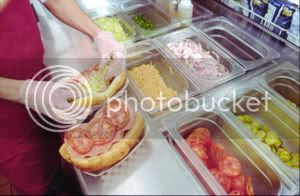 Look, it's not all bad, though. Mainly because every other sub joint in the city is amazing. Cousins is my favorite.

Why? Because they hire ex-convicts.

Former inmates make good sandwiches because they don't want to go back to jail. They put far more pride into their work than teenagers, and understand efficiency and assembly-line ethic from their prison and factory experience. They were tailor-made to make sandwiches for a living.

They always call me 'sir,' and talk nice and loud. They're usually missing a tooth or two, so they whistle when they talk.

They really shine when it comes down to the science of a sandwich. They are quick-draw ninjas with the condiments, and keep the mayo in a holster.

(He then pulls a bottle of mayo from the holster in his side-pocket, twirls it three times and splorts it liberally onto my Garlic Herb bread before twirling it again and placing it back in its chamber. It's usually at this point when I place a dollar or two in the tip jar. It's worth it, because I didn't just get a sub, I got a show!)

Speaking of which, should you tip at fast food places? Some people think not, because they aren't doing the normal tasks of a waiter at a restaurant. Personally, I tip when they do a good job. For example, if I go to a place so many times that they know my order by heart, that just earned them an extra dollar. way to go!

In conclusion, I don't like Subway. Sub sandwiches rule; you might want to consider eating one for lunch or dinner today. Tell 'em the CDP sent you; they probably know who I am. Sound off in the comments section, and tell me what you like on your sub.