You'll Know When I'm Trying To Scare You. 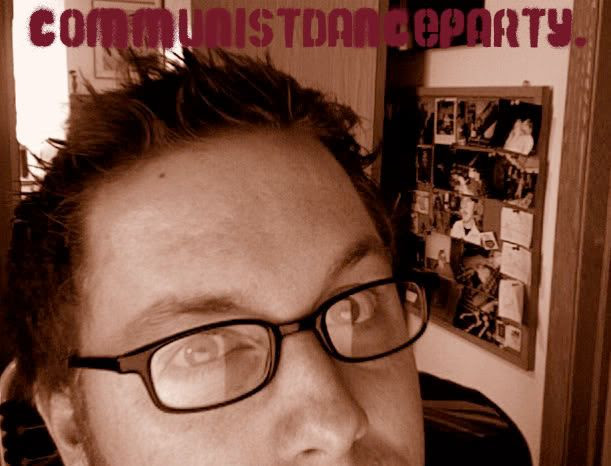 I wanted to wait until closer to Halloween to talk about this, but I just can't wait anymore. This is my favorite holiday, after all, there's no use in trying to wait any longer.

Today I reach out to The CDP Network and ask this simple question:

"What are you doing for Halloween?"

Costumes? Parties? Taking the kids out? Decorating the house? What are the trick-or-treating hours in your town? What are you handing out to the kids? These are questions I honestly want to know the answers to.

Please start the discussion in the comments section, and enjoy your weekend. Next week, I'll tell you all about my experience working as an actor in a Haunted House, and the unbridled joy of making a deserving child piss their pants. 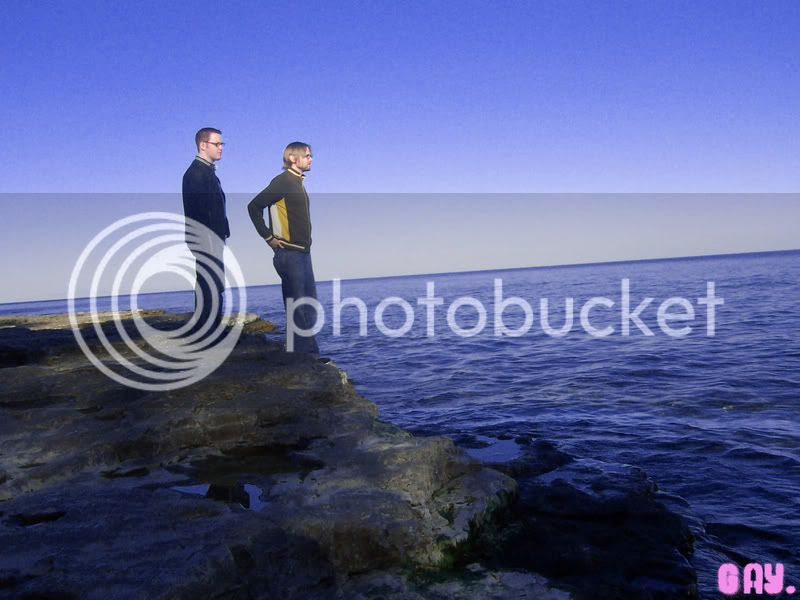 (Here, the CDP secretly wonders if anyone would notice Ben's sudden and mysterious disappearance.)

The weather was beautiful when we visited Lake Michigan. The Missus dipped her toes in for good luck, and I tried really hard not to fall in and be swept away in a riptide. 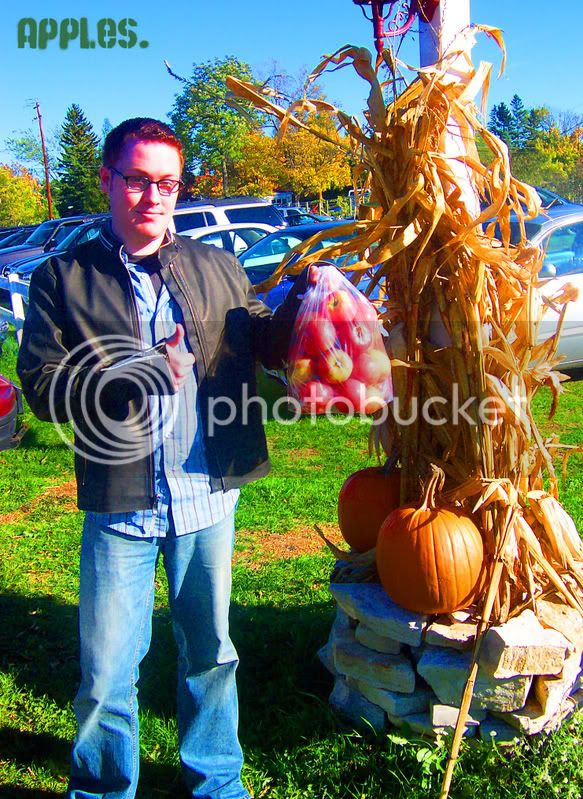 (As the CDP ages, the most inane and depressing things make him happy.)

One thing I made a point to do was pick up some apples for my Grandma. She asked for 'Snow Crisp' apples, which only attracted laughing and confused looks from the folks at the orchard. I think she meant 'Honey Crisp,' as the entire acreage was littered with them. Done and done. 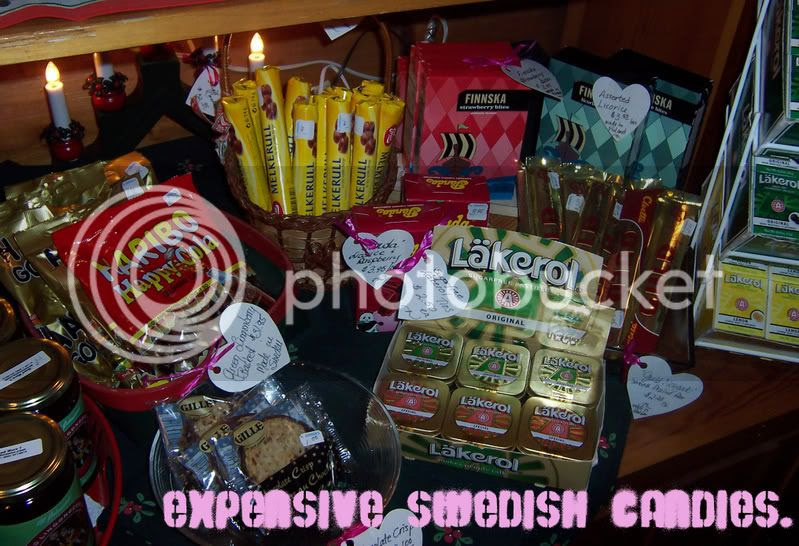 A trip to 'Al Johnson's Swedish Restaurant' in Sister Bay was eye-opening, in that all of the authentic Swedish waitresses were seven feet tall, blonde and wearing those traditional outfits. All of the arrogant assholes visiting from Illinois were enjoying seasonal jams and jellies that I had never heard of before, as I dug into my grilled cheese sandwich and begged for mercy. 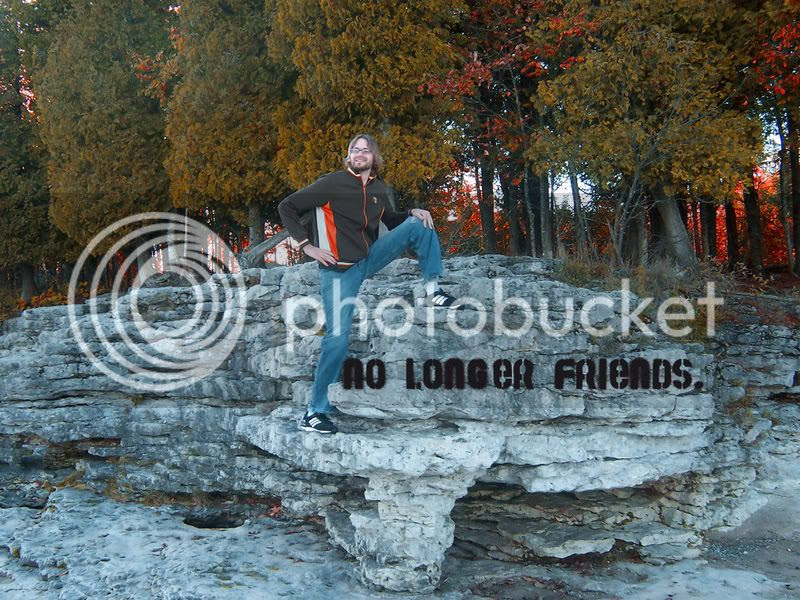 (Sadly, those pants had to be Photoshopped on.)

As much as I feel that scenery and 'being there in person' is overrated, I was quite taken by the beauty of water as far as the eye can see. It's like a more personal version of staring into space and realizing your fleeting insignificance in a random world. Also, there's pie. 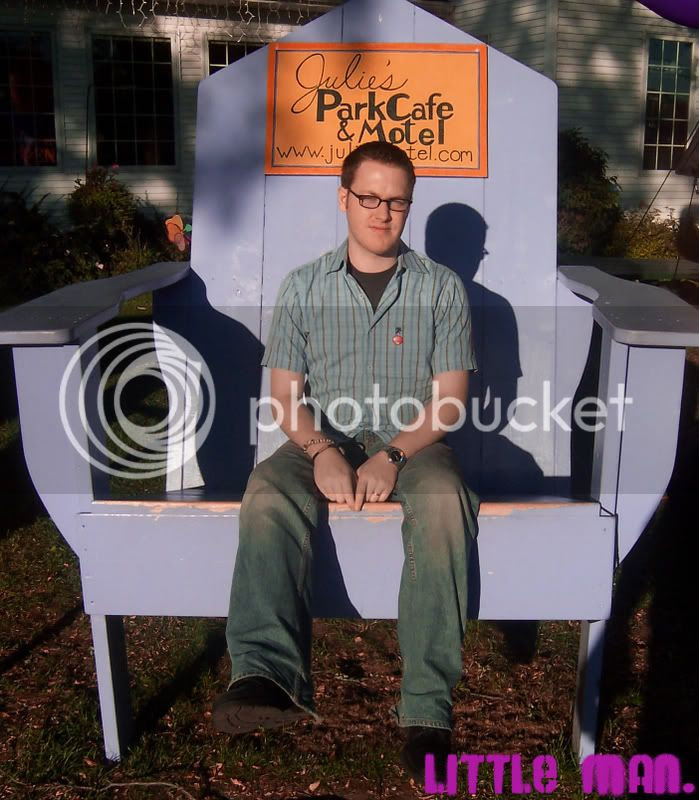 (Here, I sit in a comically small chair, and look humorously larger than I normally would.)

Julie's restaurant had amazing pasta and desserts, but halfway through our meal, a huge spider crawled onto the table and damn near gave the Missus an embolism. Minutes later, our waiter crashed into the table next to us, spilling water and food everywhere. Later, when we paid the check, the man working the counter couldn't wait to stop talking to us. It was an awesome place. 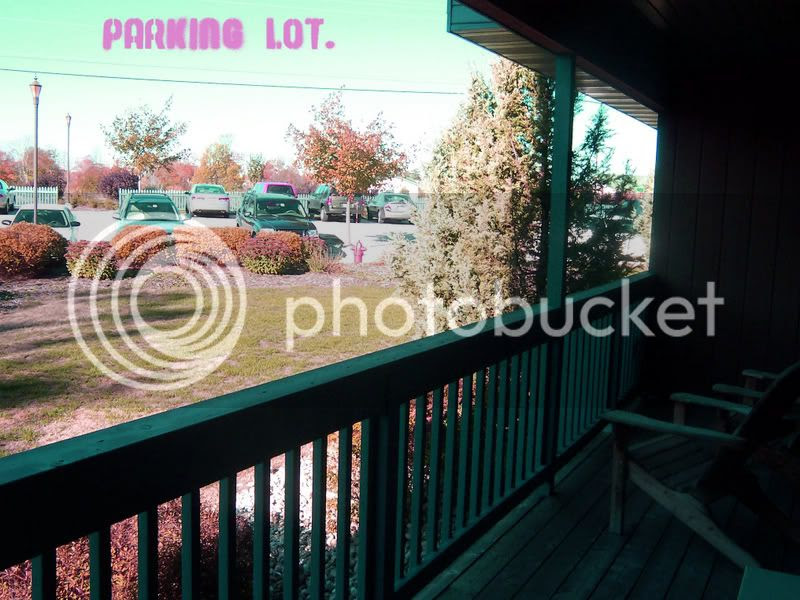 (The view from the resort was exotic, in that there were a lot of foreign cars in the parking lot.)

The four of us stayed in a two-bedroom, two-bathroom suite, boasting a full kitchen loaded with accessories. Those accessories came in handy when we were ordering pizza and drinking cider with whiskey. There was a wall-hanging that really bothered Ben, so I pulled it off the wall and set it on top of the freezer. 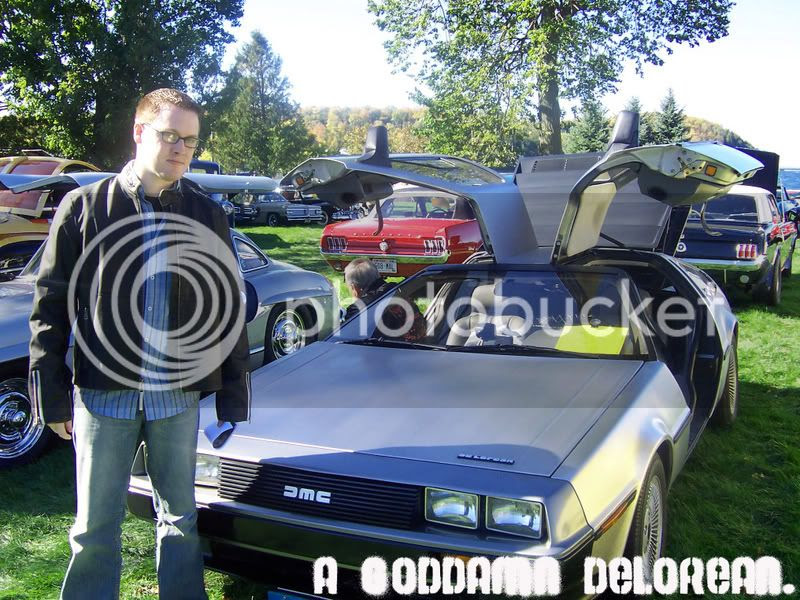 (My shirt does a fantastic job of obscuring the pee stain.)

I saw this baby at a local car show; the only time I've ever seen a Delorean in person. The owner of the car didn't want me taking a photo of myself next to it, so we simply waited until he turned away. Dude, there's like, 50 of these left on the planet! Don't be selfish! 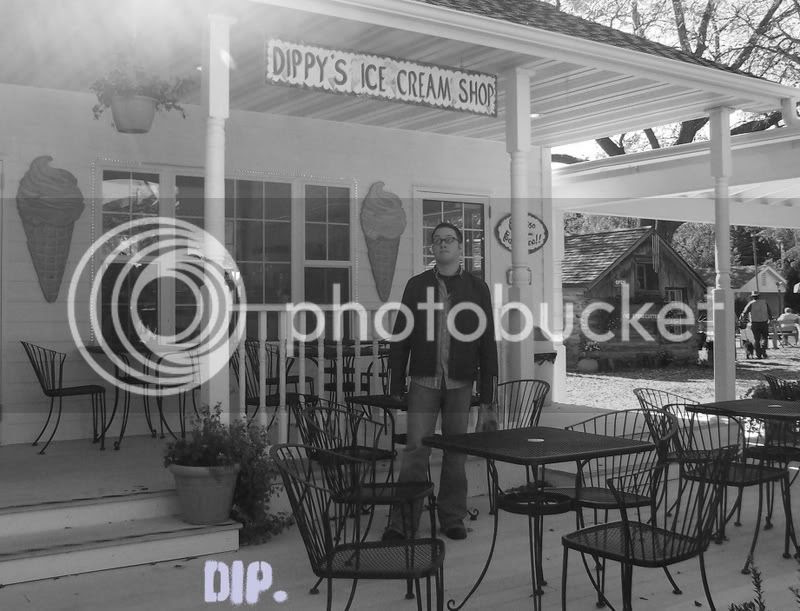 (I sometimes have dreams of running my own small shop in a tourist city. My dreams kind of suck.)

Without question, you mainly visit Door County for their endless array of knick-knack, specialty and candy shops. I took home a pound of fudge, 10 pounds of apples, two milk chocolate bars, some candy cigarettes I swore were off the market and a candle that smelled like pumpkin pie. If I wouldn't have been wearing my wedding ring, I would have been completely indistinguishable from every other gay guy there. 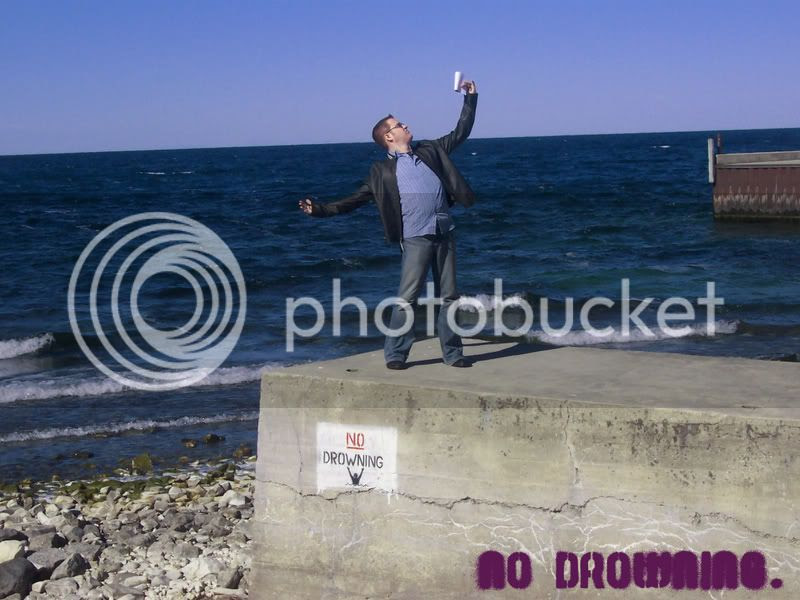 (No less than 3 seconds later, I drowned. They then asked me to leave.)

At the hotel, I walked around the entire perimeter looking for an ice machine. For a half-hour, I shuffled around, holding an empty ice bucket, while drunks and newlyweds stared at me and skittered back into their rooms. Once I did get my ice, pretty much everyone in my room was fast asleep. I don't know when I started hanging around with infants incapable of staying awake past 10pm, but it's starting to annoy me. 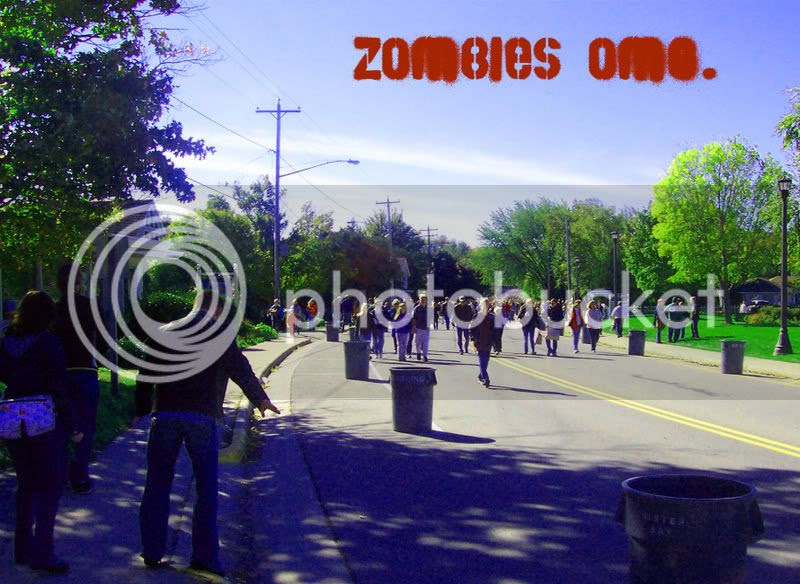 (The only way I was going to get out of this was if I attempted to blend in, and act like a smug prick.)

After the parade was over, about 5000 tourists scurried into downtown, as we walked against the grain to get back to our hotel. I pretended that they were zombies, which actually started to freak me out after a while. In the photo, you can see me lurching in a feeble attempt to blend in, so they didn't eat my brain with a side of boysenberry jam. 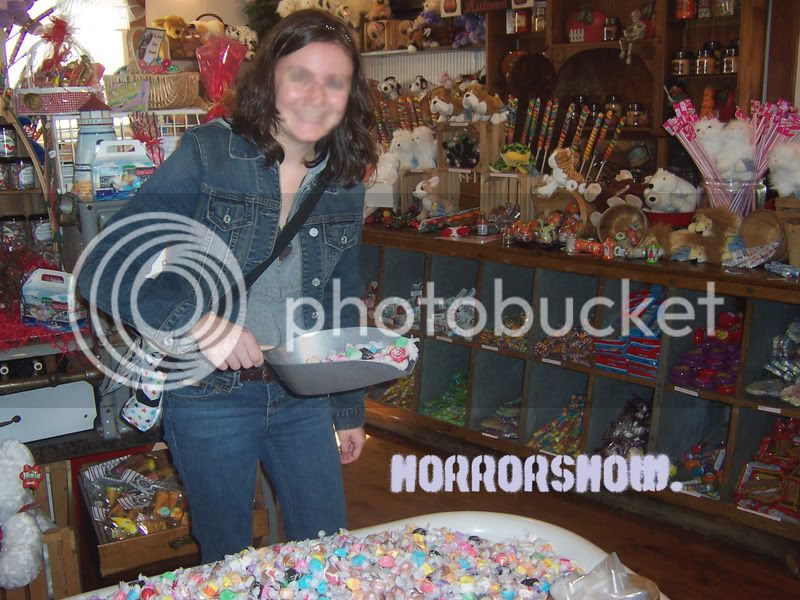 (I didn't alter this picture. Sadly, Sherry suffers from a condition known as 'Blurry Face.')

Man, candy stores smell so great. I asked one of the employees, "Isn't this the best job in the world?" The teenage boy looked at me with the face of someone who was about one more scoop of taffy away from an all-out shooting spree, so I paid for my fudge and got the hell out of there. 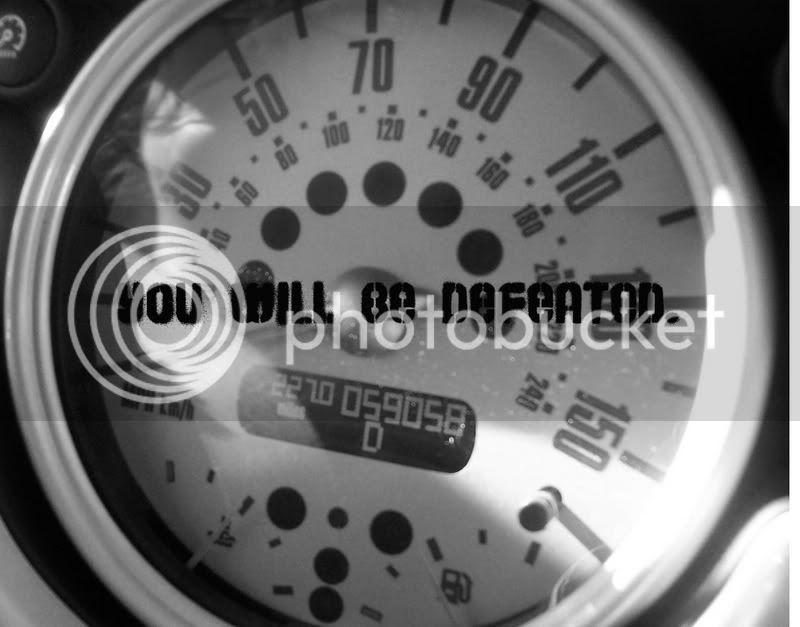 (We will race. I will win. Always. Probably. Maybe. Not really. Probably not. No. I will lose.)

Taking the MINI Cooper was a no-brainer. The Autumn weather, mixed with the winding roads and limited traffic was simply breathtaking. Also, we could park anywhere and looked like a novelty amongst all of the embarrassingly-large Expeditions and Tahoe's. A co-worker once asked me if I feel insecure about my masculinity when I drive the MINI. This person is an idiot. 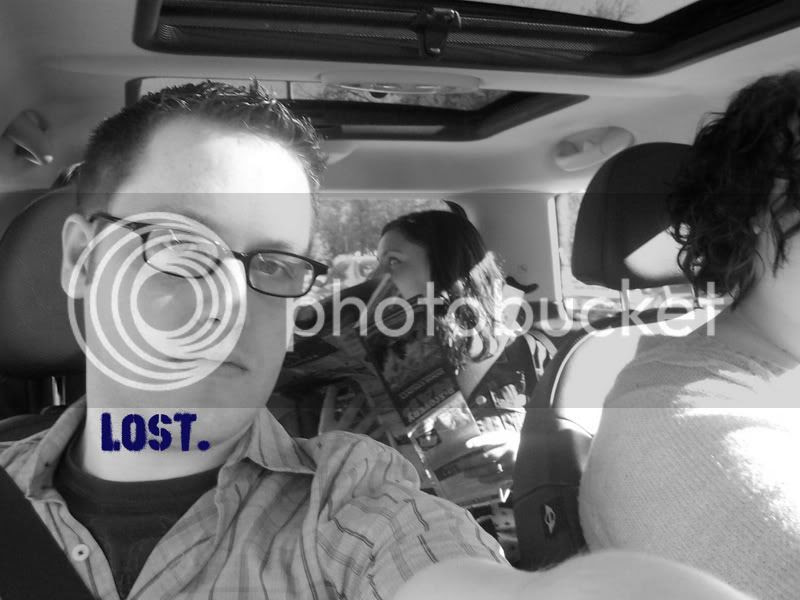 (By this point in the trip, I was begging people not to ask me any more questions about where I wanted to go.)

Ben and Sherry wanted to visit a place that sold nothing but Olive Oil. Thinking that it was some niche-place that only attracted a small group of people, I was slack-jawed to see the line for this place extending right out the door. It's just oil, people. 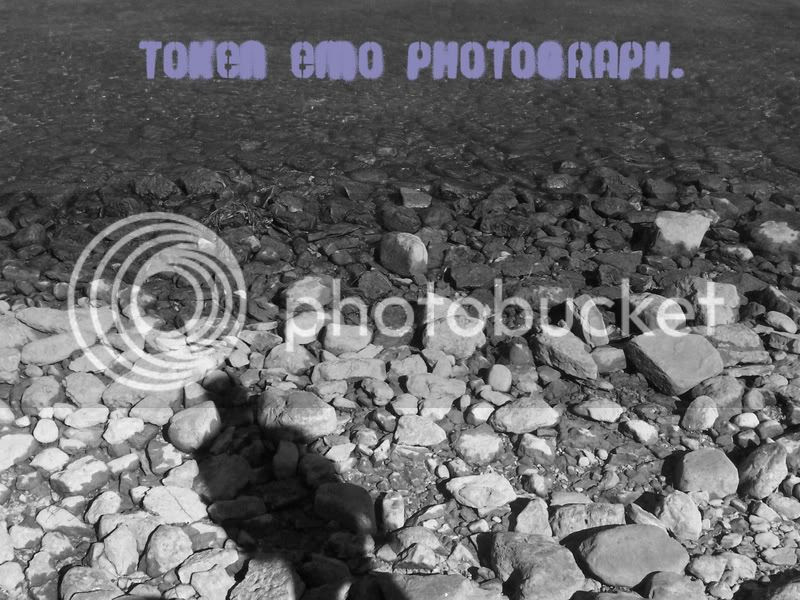 (If you have a MySpace profile picture that looks like this, kill yourself.)

Skipping stones by Washington Island (the tippy-top of Wisconsin's 'thumb') was amazing. I began to fantasize about perhaps owning a Summer home there once I became a wealthy and self-employed author. I then thought about owning a Unicorn that cried quarters and blasted Bad Religion songs out of its ass. 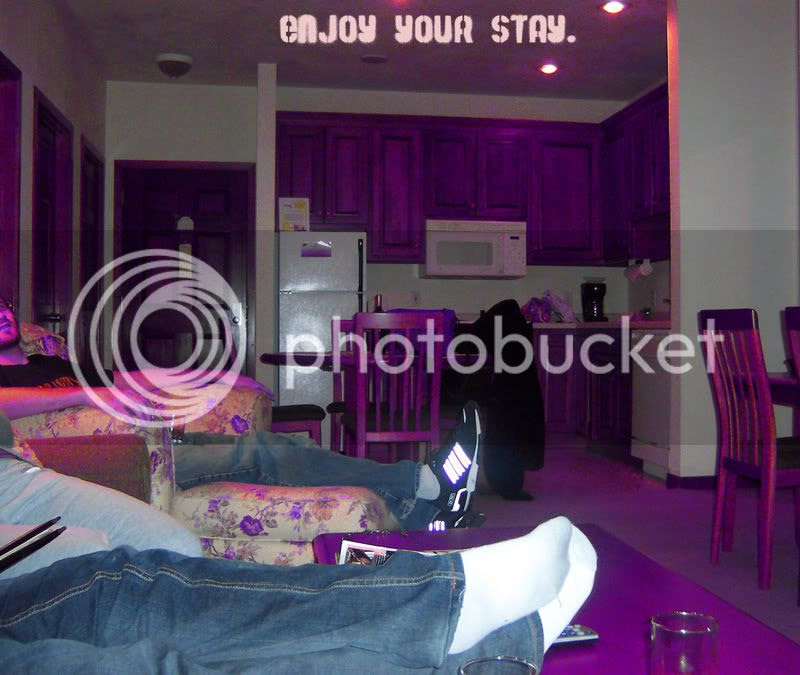 The master bedroom in the resort had a whirlpool hot tub, which me and the Missus were lucky enough to stay in. While we didn't 'use' the hot tub like I had assumed we would, the Missus slipped in it during a shower and almost knocked herself unconscious. Close enough, I suppose. 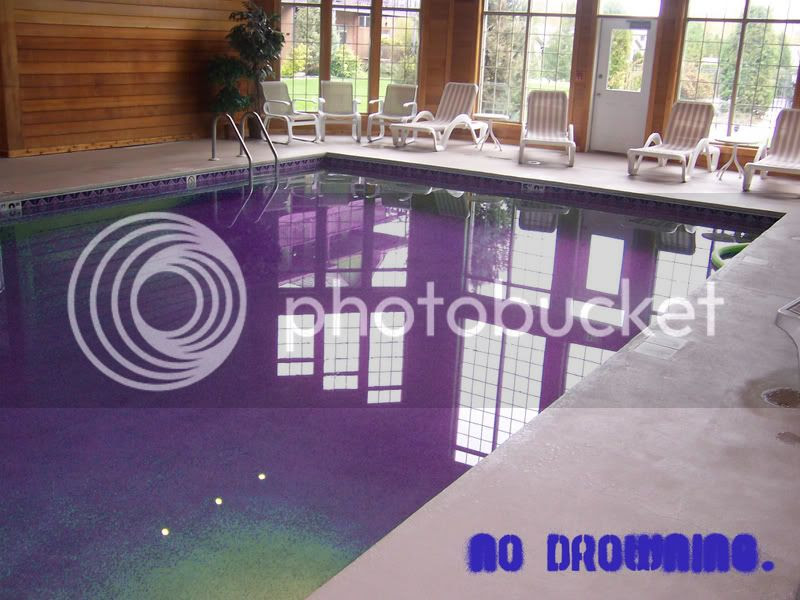 (Taking a picture of a hotel pool is a lot more legal when kids aren't around.)

Me and Ben played a set of tennis on Sunday morning, and my shoulder still hurts as of Wednesday morning. I won, however, which is the only thing that matters. On the sidelines, the Missus and Sherry tried not to notice how fat, old and out completely of shape we've both become. I appreciated their support and ignorance. 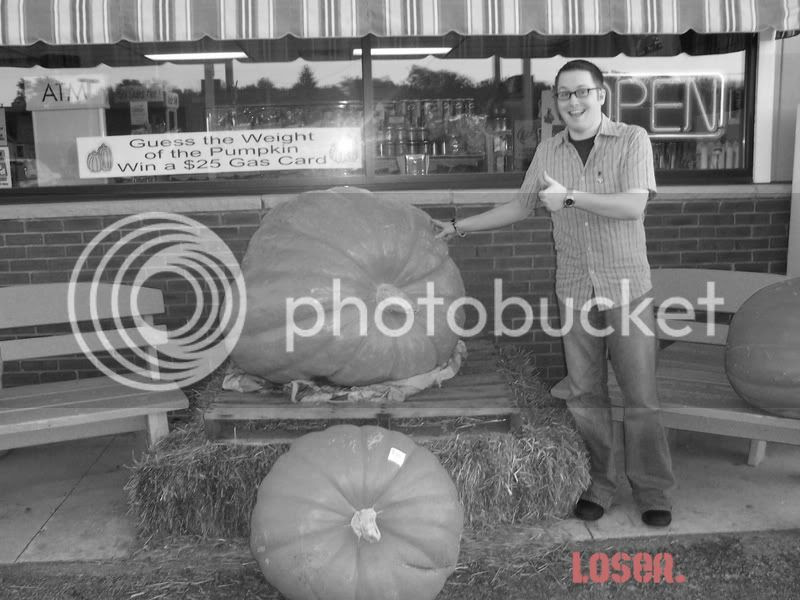 (For those that haven't met me in person, this is a normal-sized pumpkin. Two 'CDP is small' jokes in one post!)

Me and Sherry drove to a local bar to pick up a pizza, where I was instantly reminded that no matter where you are in Wisconsin, you'll always run into people that could probably be friends with your dad. Having more or less been raised in bars ourselves, the two of us didn't stick around very long, instead opting to drink alone, like well-adjusted people do. 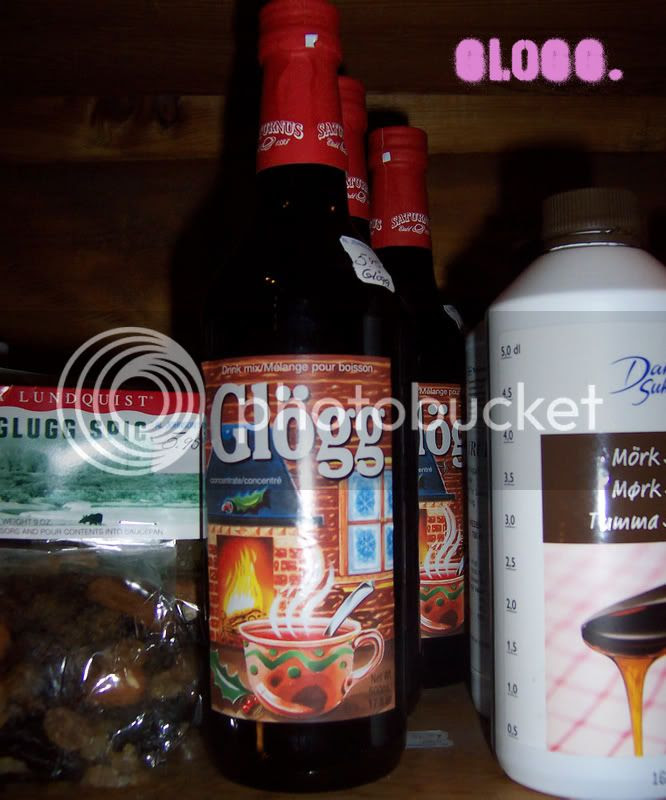 (It's funny because I don't understand it. Rich Swedes eat things that I'm unaware of.)

At one of the coffee shops, I bought a little pin that says, "I like sammitches." There wasn't a scrap of irony in that purchase; I freaking love sammitches, and want everyone to know. Later, I bought a hot chocolate that a bee landed in. I'm considering paying someone to follow me around with a muted trombone to make the 'whaa-whaa' sound every time something like that happens. 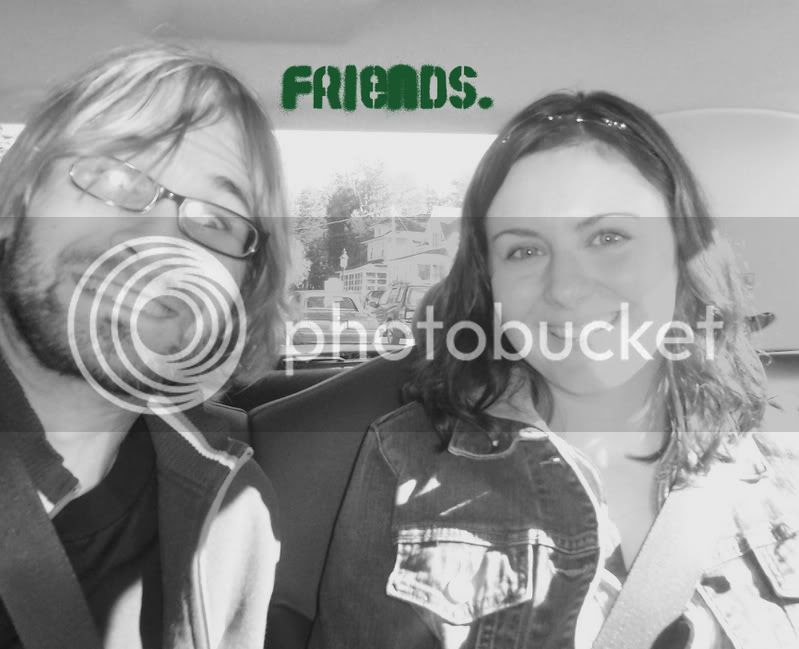 (I think it's pretty obvious how Ben snared someone like Sherry into a relationship. He got her drunk and pregnant.)

Let it be said that there's nothing more rewarding and special than traveling the world with your best friends. Even if I was a dick at times, and didn't really want to do anything. I still enjoyed myself; I'm picking the vacation next time, though. 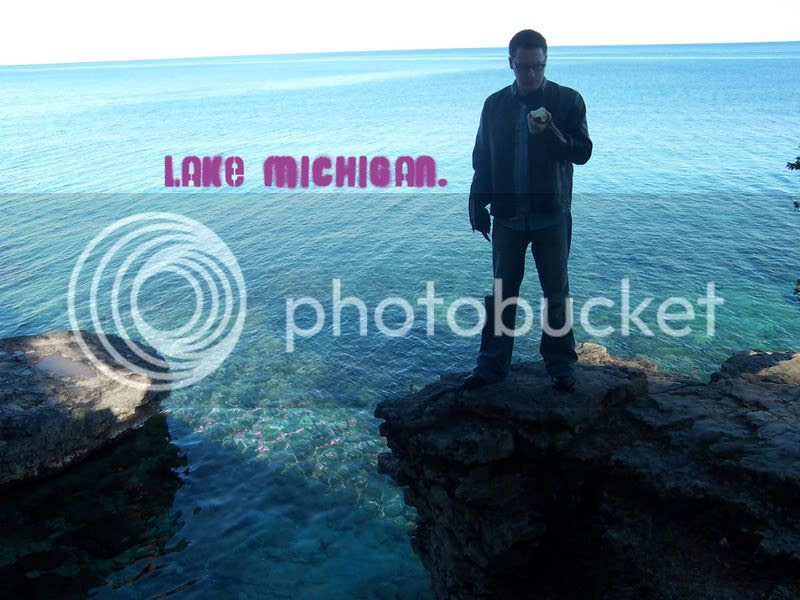 (Eating an apple, perched high atop Lake Michigan. This is 100% more Door County content than most normal Door County photos.)

So long, Door County. We'll be back, but not soon enough.

Sound off in the comments section and enjoy your day. 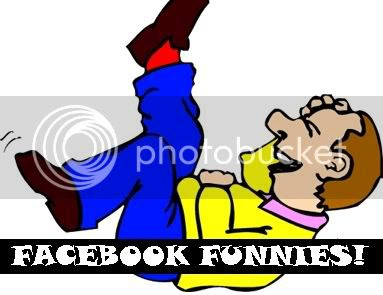 Hello, and welcome to another hilarious installment of 'Facebook Funnies,' where we get to peek into the personal lives of Facebook users by simply keeping an eye on the Mini-Feed. It's wacky! It's hilarious! It's Facebook Funnies!

Today's Facebook Funny comes to us from 'Franklin,' and was kindly submitted to the CDP by Dane 101's Bessie Cherry. This was his updated mini-feed on Monday evening:

Franklin removed "Dancing on stage with the Flaming Lips" from his interests. Franklin added "Bluegrass on a Sunday morning in the Fall" to his interests.

Thanks for stopping by, and stay tuned for the next installment of Facebook Funnies!

The Door County photo post is on the way. The CDP should have its 250,000th visitor sometime today, which damn near brought a tear to my eye.

You Missed Your One Chance To Ruin Everything. 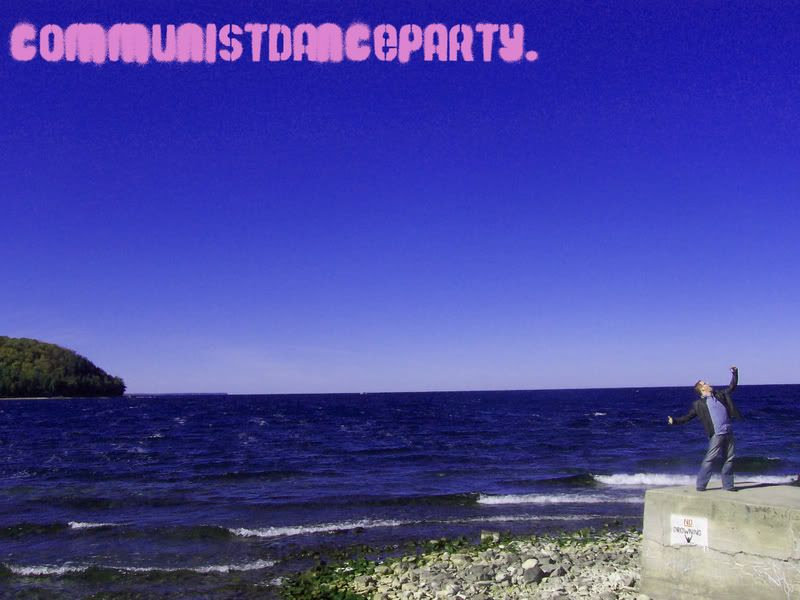 The CDP is technically still on vacation. Please sound off in the comments section and enjoy your Monday, as I catch up and prepare to tell you how I spent my last three days.