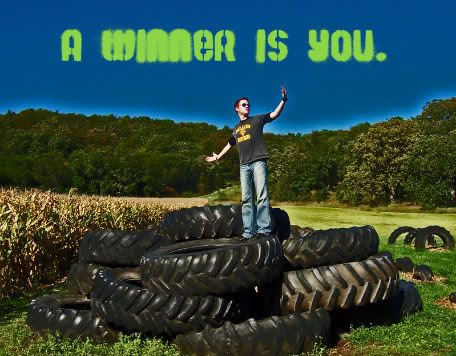 (Before you say something...It's past midnight here, and I've allowed myself internet at this time. I can't barely function let alone write anything of substance.)

You have until midnight to sign up for the Mix-Tape Trade!

It's almost 10am Central and only three (now four) comments on the CDP?!? Everyone must be having the same sort of week that I am -- that means, insane.

Happy Friday everyone! I'm anxious to get my theme and throw the next mix together for my next victim, er happy listener

... apparently I have multiple Blogger accounts and was logged in as josephine? This is news to me.

JO - I've got it all figured out, you silly goose.

HOSS - You're telling me. My flu is gone, now only to be replaced with a touch of the Bronchitis. That's the last time I get drunk and put my cat's head in my mouth. For serious.

BERRY - Maybe you're like that girl on Heroes with the split personalities, and not at all like Christian Slater in My Own Worst Enemy. Either way, I'm now fearing for my life.

That's the last time I get drunk and put my cat's head in my mouth. For serious

See, that's exactly the type of video that I would put up on Spork Nation.

I added my *official* theme submission in the previous post comments, but I'll repost it...

"The drinking will continue until morale improves"

JT - I'll roll tape next time and it's all yours.

MAUS - Right awn. Things are going pretty smoothly for the Mix Trade so far. Our number is hovering around 20 right now, and I just need a few more phrases from a couple of stragglers, but that's it.

Oh, and welcome back, The Office! Favorite moments, anyone?

...I'll spend most of my evening around here or on UG I suppose.

No offence, but I never really found the American version of 'The Office' to be half as funny as our version. Steve Carrell pulls it all off flawlessly, but I never found the characters as likeable. Just MHO of corse.

I find Steve Carrell's portrayal of Michael Scott almost too painful to watch, so I end up fast forwarding through his scenes a lot.

Last night was okay...it didn't hold my interest as much as I'd hoped.

Carrot Duff, my new favorite show is on BBC America - Primeval...last week's episode had Velociraptors. In a MALL. Paleophile heaven right there, I tell ya.

Primeval entertained me moderatly for the first two weeks, but eventually they did the very thing that kills 90% of good TV shows.

Yep.
They brought in a huge, time traveling, flying alien, hybrid, dinosaur hunter. Some how they're coming up to their third season over here.

Ending the show with a paralyzed Toby was, to me, the single darkest moment in Office history. Don't get me wrong, I laughed my ass off, but wow.

I'm just enamored with Michael's current crush. God help me, I just love goofy women. Watching them rap in the warehouse made me extremely happy.

MAUS - Velociraptors. In a MALL. Paleophile heaven right there, I tell ya.

I completely misread that as "pedophiles" and was thoroughly confused for a few seconds before I figured things out. Clearly, it's the end of the work week, and I need to get more sleep.

Tomorrow, however, I shall be biking 60 miles through the southern Wisconsin countryside and being fed delicious, organic meals at various farms. It will be both wonderful and, I'm sure, exhausting, and I may not be able to sit down for days following.

"It will be both wonderful and, I'm sure, exhausting, and I may not be able to sit down for days following."

Velociraptors. In a MALL. Paleophile heaven right there, I tell ya.

Well, I figured somebody would probably read it as that.

That's why I didn't change it to something like 'dinophiles'... ;)

So, now that we know for sure (maybe) that McCain's not going to back out of the debate tonight (just like he did with Letterman), does anyone have a drinking game they'd like to share?

Personally, I plan on drinking anytime McCain says '9/11,' 'POW,' refers to the audience as 'friends,' or allows any mention of Sara Palin's retarded baby.

Oh, and if he uses the whole "I wanted to be in Washington to help the economy and the nation" ruse in any way as an excuse to be unprepared, garner sympathy or any other leverage tactic against Obama, Barack had better stride across the stage and roundhouse kick that bastard right in the goiter. I can't believe anyone's buying that line of bull rip.

Just play your role as a Republican nominee, John. Don't resort to games because your campaign is showing signs of weakness. Take the high road and make this debate historic.

And speaking of historic, the very idea that an African-American will be taking the stage in Mississippi to speak makes me sort of terrified for the guy. And if you weren't thinking the same thing, you're a liar. It's like, the most racist state in the union.

Keep it simple, Barack. Stick to the facts, stick to the plan and don't stoop. You're a good speaker that should excel in this forum.

I'll be watching this instead of the Brewer game; that's how important this is. And hell, it's all about foreign policy tonight. You know, the boring stuff.

My chronic politically exsaserbated indigestion led me to go see a play at APT tonight instead of the debate. I shall catch up through post-debate snarky commentary, instead.

As for drinking games, Wonkette's got you covered.

And as a chaser, might I offer our latest Kino opus? I get to be God. And set cereal on fire. It's pretty cool.

EMILY - Once again, great work. Rob has the funniest, most cynical and sarcastic voice I think I've ever heard. I could listen to that guy read the phone book and I'd probably laugh for at least half of it.

I'm attracted to your arms. They look really smooth.

Once of these days, I'll write up a 5 minute thing that you guys can shoot. Scout's Honor.

Oh, y'all fence-danglers have less than 6 hours to sign up for the CDP Worldwide Mix-Tape Exchange IV. Get to it!

How about drinking every time McCain says something stupid. So that means whenever he opens his mouth. Yeah...cliche.

My official catchphrase: "Stupid is as stupid does." I guess I am inspired by my 4th period class watching Forrest Gump and my currently viewing of the debate.

Great; thanks everyone. Signup is now closed, and we've ended up with 18 participants. Not a new record, but certainly not a bad turnout whatsoever.

I'll be drawing names this weekend, and the huge unveiling will take place first thing Monday morning. Until then, keep an eye on the Milwaukee Brewers and dig through the Top 30!

Smoothie McArms-A-Lot, is what they call me.

See, I figured as such.