I'm So Glad That You Exist.

Tonight, I see the almighty Weakerthans for the very first time.
The Weakerthans are on an extremely short list of bands that I have yet to see live. After Polysics came to Wisconsin and destroyed everything in their path last year, they were pretty much the only band left that I really felt I needed to check out in a live setting. In fact, out of all the current, active musical acts on the planet right now, I can only think of about five of them that I truly still need to check out before I check out.
1. Mew (Ridiculously unbelievably amazingly sexily awesome)
2. Lifetime (They're sort of back together; it changes on a moment's notice)
3. Paul McCartney (In any functional performing capacity, really)
4. They Might Be Giants (I have no excuse for this; they play Madison all the time)
5. The Beastie Boys (Because they're freaking legendary)
Oh, and if I could force ten previously-unseen bands to get back together at gunpoint and perform for me, my top choices would be the following:

1. At The Drive-In
(I don't know what I can say that wouldn't be an understatement)
2. Neutral Milk Hotel
(Just Jeff Mangum and whoever else wants to play drums)
3. Husker Du
(Twin Cities represent; one of the best rock bands of the last 25 years)
4. The Promise Ring
(The emo torch bearer, and from Milwaukee, no less)
5. Scott Reynolds-era ALL
(Forget Descendents, ScottALL was the punk pinnacle)
6. Operation Ivy
(Although I'd love to punch Tim Armstrong square in the sack)
7. Danzig-era Misfits
(Buy Collection I and II if you wish to continue living on Earth)
8. My Bloody Valentine
(Although a 2008, reverb-filled reunion is in the works)
9. Minor Threat
(Enough with Fugazi, already)
10. Algebra One
(I'd set my house on fire to hear them play 'Burn Your Way Home')
I only included bands that could actually get back together (so The Beatles and Mayhem don't count). That's pretty much it.
My five favorite concert experiences ever?

1. The Impossibles/Ultimate Fakebook - Globe Theater, Milwaukee - 2000
2. Green Day/Superdrag - Eagles Ballroom, Milwaukee - 1997
3. Arcade Fire/Final Fantasy - First Avenue, Minneapolis - 2005
4. Weezer/Ozma - The Rave, Milwaukee - 2001
5. Saves The Day/Ash - Congress Theater, Chicago - 2004
(#6 would be pretty much anything that ever happened at the Concert Cafe in Green Bay. I kept it mainstream because nobody cares about bands that they don't know about.)
So, the time has come to bust out your lists in the comments section. Let the CDP faithful know:
1. A band that you absolutely still need to see.
2. A former band that you wish you could see.
3. Your favorite concert of all-time.
Sound off in the comments section and enjoy your day.
posted by The CDP. at around 12:03 AM | Link | 88 Comments

The Freedom Of Press Will Make You Tap Out.
You know you've made it when the nutcases start bothering you for no good reason.

Two years ago, I published 'The Worst Album Covers Of All Time,' a classic CDP pop culture piece and still one of the most popular humor essays I've ever written. In said hilarious essay, I spotlight an album by Level 14 Master Ninja, Reverend Mike Crain, titled 'Karatist Preacher' or 'God's Power,' depending on how you chose to read it. 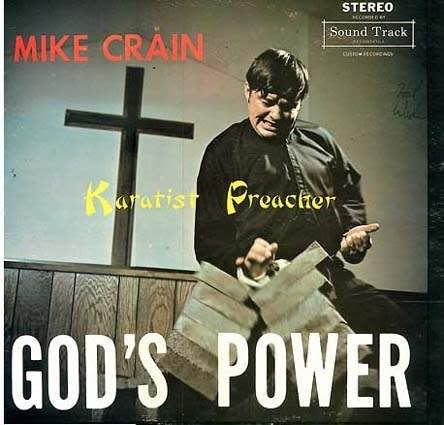 This particular album cover came in at #8 on the countdown; a fair showing considering the soul-crushing terror I experienced upon viewing the bulk of these records. The accompanying witty commentary for this cover was as follows:

"Mike Crain is a triple threat. Not only is he a singer as well as a man of the cloth, he's also a black belt! That's more than I can claim, so I can't bust on this guy too much. Say what you will, but when was the last time you saw a preacher smashing bricks with his palms in church? Maybe if there were more guys like Mike Crain around, I'd go to church more often. You know what? This might actually be the best album cover ever."

"The power of Christ compells you...to break these bricks of Satan! Yaaahhh!"

All things considered, I was pretty easy on Mr. Crain. In fact, I quite like this album cover. Compared to such abominations as Heino, Manowar and DJ Dave 'The Turntable Slave,' Mike Crain might as well be Paul McCartney with nunchucks.
Time passes. Seasons change. Boys become men. Two years pass.

Just yesterday, I open my CDP inbox to find a message titled 'Mike Crain.' I figured it was a spam message, as I had completely forgotten anyone by that name existed. The e-mail was written by someone who was not Mr. Karatist Preacher, but still delusional and a bit wonky nonetheless. As follows:

I just want to let you know, that ALL of these pages are being viewed by Mike Crain’s attorneys and that you need to take down this information. Mike Crain is a very sick man. You need to information off that page. That album has a copyright on it and you are in violation of that copyright, no matter where you live. We are warning all of the people who have these album covers posted to remove them. You have 30 days to get it off of the internet or we will make you take it off and you will be charged for using a picture that has a copyright. It’s about a $35,000.00 fine if you want to pay it. You do not have permission to use this picture.

So....yeah. I didn't change a word of it, but I did withhold the name for fear of further legal litigations. He's a 'sick man?' Is he dying, or merely a pedophile? I haven't yet figured that line out. If he is dying, I offer nothing but my deepest sympathies to the Crain family. If he's a sexual predator, then he can rot in hell for all I care.

If he's both, then I remain conflicted and silent on the matter.

Furthermore, where did the $35,000 fine come from? Had I actually been in violation of copyright law, 35 grand would be a steal!

Instantly, this stank of buffoonery and religious bullying. I knew that whomever this person was simply had far too much time on their hands, too much medication in their cabinets and knew absolutely nothing about the legal system and Fair Comment Copyright Laws. I even consulted one of the many attorneys I know about my legal rights, and we both laughed heartily whilst smoking a Cuban cigar.

A quick Google search shows that this image is on at least 771 other websites in connection with 'Worst Album Cover' lists of their own. This includes major nationwide newspaper franchises as well. Fair Comment Law allows me to use the image as a member of the press to review a particular piece of media in my own personal voice and opinion. There is no copyright on the album itself, the image was lifted from another website entirely and falls completely outside anything that would be considered slander or libel.

Freedom of Press strikes again, bitches! Look it up; the law is awesome!

Look, if there's two things I've learned from my time spent studying music business in college, it's that the right amount of cocaine will get you into any party, and when it comes to law, I know exactly what I'm talking about. You attempted to rob a gun store with a switchblade. You picked the wrong guy's ass to blow smoke up.

So, needless to say, I win. Times a million. I've removed maybe three things from the CDP in the last four years, and that's already three too many, if you ask me. However, since I am a fair man, I will offer the sender of the e-mail and Mr. Crain's representative an ultimatum.

To properly convey how serious I am, here's a picture of me wearing a blazer.

I, Ryan Zeinert, creative mastermind behind the Communist Dance Party, published author, award winner, funniest blogger in Wisconsin and MINI Cooper owner, will hereby remove the photograph of the 'Karatist Preacher' album cover under one of two conditions:

1. I receive a professionally-written statement from Mr. Crain's personal attorney, citing exactly what copyright laws I am violating. OR

2. Mr. Crain beats me in a Mixed-Martial Arts match. You pick the time and location.

I believe you'll find this to be a fair deal. I look forward to not hearing from you, as any further correspondence on the matter will not even be opened by yours truly. Find someone else to bother; I have jokes to write.


TOMORROW: THE CDP GOES TO JAIL!

Twenties On Top, Fifties On Bottom. 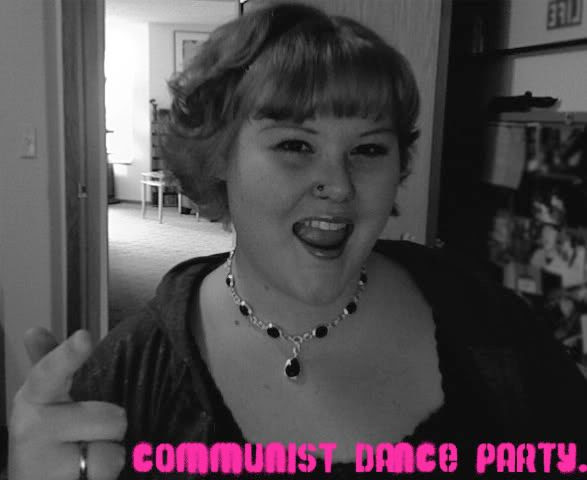 Due to Easter and other extenuating circumstances, this week's Lost Monday will arrive...never. I have a book to start writing, I'm looking at houses with my real estate agent damn near every night and I'm needed at public gatherings on Wednesday and Thursday. Real life beckons for the time being, and it just isn't going to work out this time around.

Please use the comments section as a way to discuss last week's episode, along with the second half of Season 4. I'll get you started with some topics of interest:

Rousseau and Karl got capped, Widmore and Benjamin are both trying to keep the island a secret for different reasons, Tom is gayer than Canadian money and Michael sucks so much at life that he can't even end it properly. Satisfied?

In NCAA Tournament news, ten of my Sweet 16 picks are still alive, along with all of my Elite 8. That being said, I'm resting comfortably at the rock bottom of my office pool for some inexplicable reason. Why do I throw $5 at this thing every year? I'm letting the cats pick my 2009 bracket, mark my words.

Wisconsin looks to reach another Final Four, and Duke continues to suck a gravy boat full of ass. All is well. Spring is here. 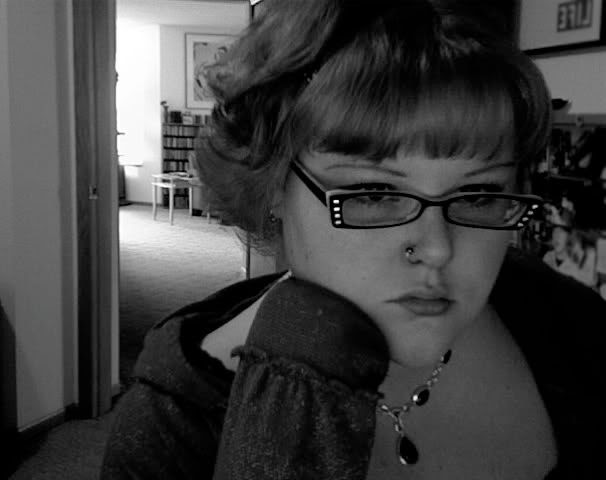 ("Another book I have to pretend to like? This makes me pouty.")

As mentioned last week (in the CDPeons Facebook Group, which you should all be joining for multiple reasons), I will be devoting the month of April to break ground on my second book. I aim to have it all wrapped up by the end of the year, but things are bound to change on a moment's notice. The CDP will remain updated on a semi-weekly basis, as it would pain me to leave you all alone in the chilly Blogosphere like that. I'm not that sort of man.

Sound off in the comments section and enjoy your Monday.