A Feral, Angry Cantaloupe Of Hellfire And Awful. 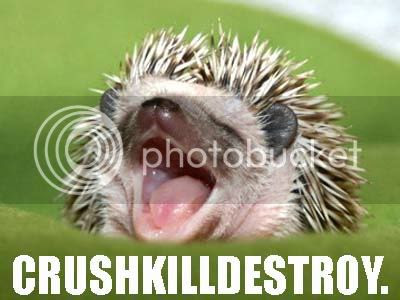 Wow, I decide to lay low and take it easy for a month, and by the time I get back, everyone that we've ever cared about is freaking dead. It seems as if the curse of 'Death In Threes' has continued, only with Billy Mays thrown in as an absolutely free bonus gift to you!

Too soon. Let's move on.

As you may already know, the Missus and I are the proud and increasingly indifferent (respectively) owners of an African Pygmy Hedgehog named Laika. We’ve had her for about two years now, and for all intents and purposes, she’s a full-fledged member of the family. Sort of like a younger, hunched-over sister that’s covered in needles and eats mealworms. Every family has one.

The name Laika was chosen by me, as an homage to the Russian Space Dog of the same name; a street mutt that was sadly launched into orbit by the Ruskies with no intention of rescuing her. The original Laika has since been commemorated with a postage stamp and sculpture bearing her name and cementing her legacy as a canine pioneer in the early Space Exploration movement. I’ve always found the story to be equal parts fascinating, saddening and heroic, and to this day, I cannot look at our hedgehog without imagining her donning a tiny space helmet and blasting off into the terrifying blackness of the unknown. Wishful thinking, perhaps.

But I jest. To me, she always seemed about as well-behaved and intelligent as one could expect from what amounts to nothing more than an insect-munching rodent. Of course, my opinion was admittedly skewed as I had never been in intimate contact with any other hedgehogs in my life, save for that isolated incident in England where one skittered over my shoe and nearly caused me to ‘splatter my khakis,’ as the Brits never say.

That being said, she’s low-maintenance and lower-profile, idly going about her nocturnal ways in her spacious cage in the master bedroom. Most nights, she can be quietly heard pattering about on her exercise wheel (hedgehogs are easily capable of running 6 miles a night), generating a comforting White Noise of sorts for me and the Missus as we drift into slumber. As the weeks and months piled up, I began to think to myself, “Wow, maybe hedgehogs aren’t so bad after all.”

Wrong times a million, and I now have proof.

Last month, the Missus and I agreed to ‘hogsit’ for a friend’s hedgehog while she went on vacation. The hog in question, an intimidating monstrosity named ‘Whiskers,’ was now taking residency in our master bedroom right along side of Laika’s cage for the next two weeks.

The differences between Whiskers and Laika were fairly noticeable from the start. First off, Whiskers was approximately 3-9 times the size of Laika; she honestly looked more like a morbidly overbese* badger than an unassuming, spiny insectivore. I secretly wondered if someone had been sneaking raw bacon and mayonnaise into her food supply from the moments shortly following her birth.

*‘Morbidly Overbese.’ Work it into your next discussion!

Secondly, I quickly learned that Laika is well-behaved because the Missus trained her to be well-behaved. Acclimated her to human scents, handling and familiar schedules. Developed a bond and trust with her. Let her burrow around in her shirt and chew on her hair. Essentially the very same things that she did to develop a lifelong bond with me. When you don’t establish these boundaries early on with what amounts to a wild animal, they…well, pretty much stay wild.

Everyone knows that hedgehogs ball up when frightened or angry. What you may not know is that they make a ‘huffing’ noise as well. It sounds a bit like a rattlesnake with emphysema; a low, rattling, wheezing, shaking warning cry that doesn’t sound the least bit inviting or worth screwing around with. Describe it any way you wish; it just plain sounds dangerous, and whenever I hear it, instinct kicks in and I immediately leave the premises. I know better than to deal with anything covered with allergy-inducing spikes, even something that’s small enough for me to easily demolish with a hand-held rubber mallet. Don’t think I haven’t thought about it a time or two.

Laika was a small, smart, resourceful friend to all. Whiskers was a humongous, feral, angry cantaloupe of hellfire and awful, and I was now sharing a bedroom with her.

Have you ever had someone spend the night at your house that you just didn’t trust? Be it that you thought they would steal something, bludgeon you with a golf club or attempt to nudely slip into bed with you? This is exactly how I felt for the two weeks that Whiskers invaded my personal space. I slept with one eye open. Every foreign noise was heard by perked ears. Every solitary creak was met with me sitting straight up in bed, clutching a baseball bat and drizzling with flop sweat. I had no doubt that she was more than capable of chewing her way through the steel bars of the cage, methodically clawing her way up the imitation Goose Down comforter and proceeding to eviscerate me from the inside-out.

Oh, and with Whiskers’ extra weight, extra mass was certain to follow. Listening to this nightmarish Chupacabra shuffle, rumble and gallop on her exercise wheel sounded exactly, exactly, like a shoe in the washing machine. It was ferocious. It rattled the house. It kept me up for four straight nights. The Missus, fresh off of blowing out her knee while roller skating, was so jacked up on medication and NyQuil most evenings that she had no idea what was happening. There she’d be, out like a light at…oh, say 5:30pm, while I spent the remainder of the evening pacing around the bedroom, literally (and depressingly) berating an obese hedgehog for minutes at a time.

I’d stand at the base of the cage in my boxer shorts, wedge my haggard and stubbly face against the bars of the cage and yell-whisper from around 2:30 to 3:45am:

Even though my office was clear across the second floor of my house, I could still hear her in there. Nothing short of sleeping behind the water heater in the basement was going to rid me of this nightmare. For two of the four nights, I slept on the floor of the living room with the cats.

As a teenager, I knew that with adulthood would arrive a certain amount of adult responsibilities that I wouldn't quite understand until they showed up at my doorstep. Managing a marriage, managing your finances, managing your professional career; these were all things that I had to learn and tackle one jittery step at a time. 'Whiskers' represented the banana peel. The intangible. The X Factor. The runaway cement mixer at the company picnic. You can't prepare for something you never, and I mean never, thought you would encounter, regardless of how insignificant or outwardly silly it appears to be.

Life never ends up the way you plan it in your head. Once you accept that, things seem a lot more fair.

Sound off in the comments section and enjoy your day. 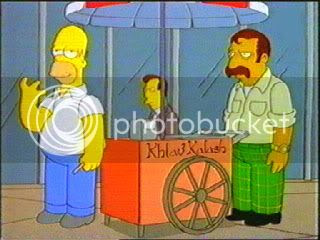 Synopsis – Homer allows Barney to use his car when Barney is picked to be the designated driver for that night at Moe's Tavern. However, Barney disappears for two months with the car and returns without it. Homer searches for his car and eventually receives a letter from the City of New York. The family is excited to go there to obtain the car, but Homer, who had a bad experience in New York when he was younger, is reluctant. 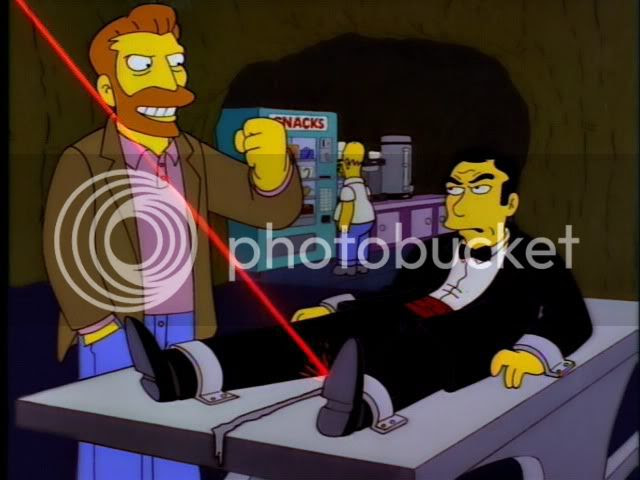 Synopsis – When Homer accepts a new job at the Globex Corporation, the Simpson family moves to Cypress Creek. Homer enjoys his new work and his easy-going boss, but is completely unaware that his boss is an evil genius and that the company is a vehicle for international extortion. The rest of the family have trouble settling in Cypress Creek and Homer must make a choice between Cypress Creek and Springfield. 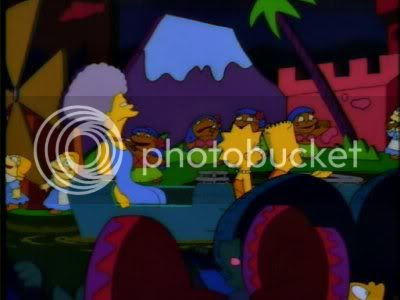 Synopsis – Marge's Great Aunt Gladys Bouvier dies and the Simpsons, Patty, and Selma attend her funeral. During the reading of her video will, Gladys tells Patty and Selma not to die lonely and miserable like she did. Though Patty doesn't care, Selma decides that she wants a baby. Meanwhile, Homer eats a spoiled hoagie, and becomes dreadfully ill. As a result, he can not fulfill his promise of taking Bart and Lisa to Duff Gardens and Selma agrees to take them instead. 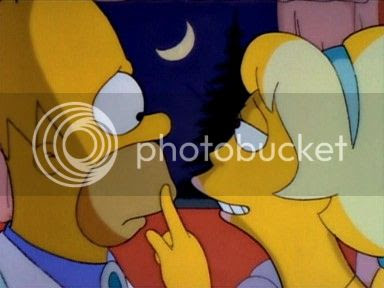 Synopsis – After Homer's behavior at the movie theater embarrasses Marge, they have a large argument, causing Homer to head to a redneck bar where he meets a beautiful barmaid named Lurleen Lumpkin with a talent for singing. Homer becomes her manager and does everything he can to make Lurleen famous, but it takes a very long time for him to notice Lurleen has fallen in love with him. With Marge already upset and thinking Homer's the one with the roving eyes, it's time for him to decide on his romantic future. 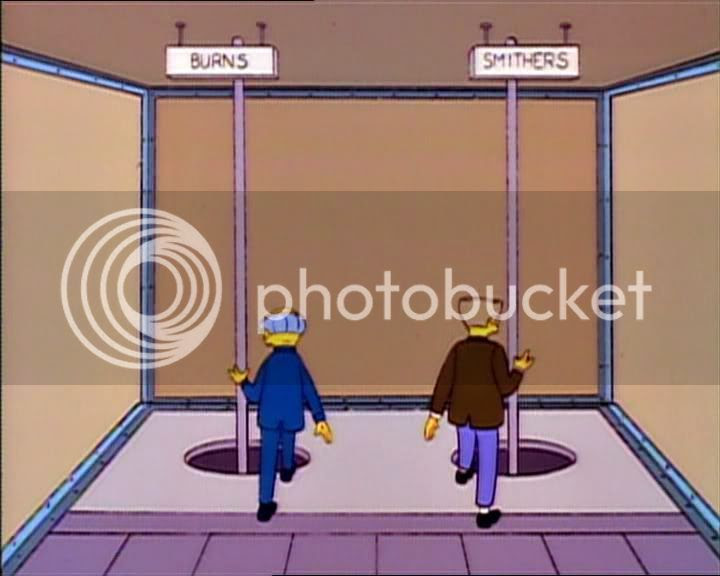 Synopsis – After learning that Mr. Burns' decision to revoke their dental plan has coincided with Lisa needing braces, Homer convinces his coworkers not to give up their dental plan and becomes the new head of the workers union at the Springfield Nuclear Power Plant. He holds talks with Mr. Burns, but these go badly because Homer is not intelligent enough to understand Burns' sly innuendos. The plant goes on strike and Mr. Burns decides to take away the electricity for the entire town. However, this encourages the workers union and Burns decides to reach a deal with Homer. 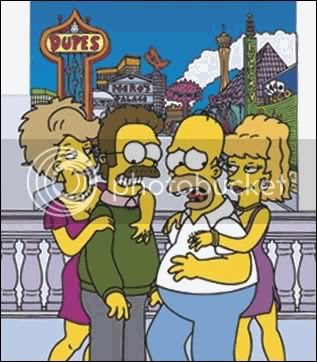 Synopsis – When Ned Flanders reveals that he is 60 years old and looks young because he has done nothing exciting in his life, Homer decides to take him to Las Vegas, where, after a night of drunken partying, they end up married to two derelict barmaids. 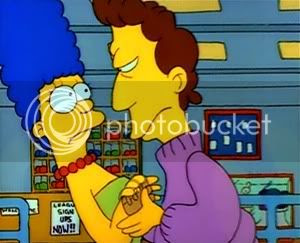 Synopsis – Having forgotten about Marge's birthday, Homer rushes to the Springfield mall and impulsively buys her a bowling ball. Marge is not impressed with the gift and after discovering that he intends to use it, she decides to spite him by going bowling herself. While at the alley, she meets Jacques, a charming French bowling instructor, who offers her lessons. Jacques begins to fall for Marge and Marge undergoes a moral dilemma. 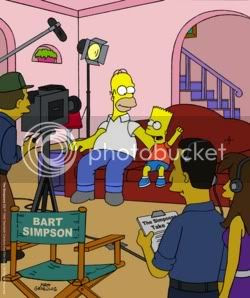 Synopsis – In a parody of VH1's Behind The Music, viewers take an inside look at The Simpsons' rise to fame, and the many scandals, feuds, and break-ups that threatened to end the show and split up the family. 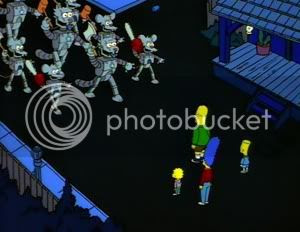 Synopsis – Bart and Lisa convince their parents to take their family vacation at the newly opened Itchy & Scratchy Land. The vacation seems to be going well, until Bart and Homer are both apprehended by the park security for assaulting a staff member dressed in an Itchy suit. Professor Frink realizes that all of the park's Itchy & Scratchy robots will turn on their masters; an event which proves true as a horde of Itchy and Scratchy robots advance on the Simpsons. 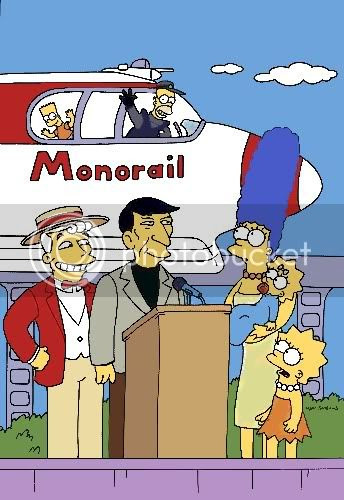 Synopsis – After Mr. Burns is caught storing his excess nuclear waste inside Springfield Park's trees, he is ordered to pay the town $3 million. The town is originally set to use the money to fix Main Street, but the charismatic Lyle Lanley interrupts and convinces the town to use the money to buy one of his monorails.