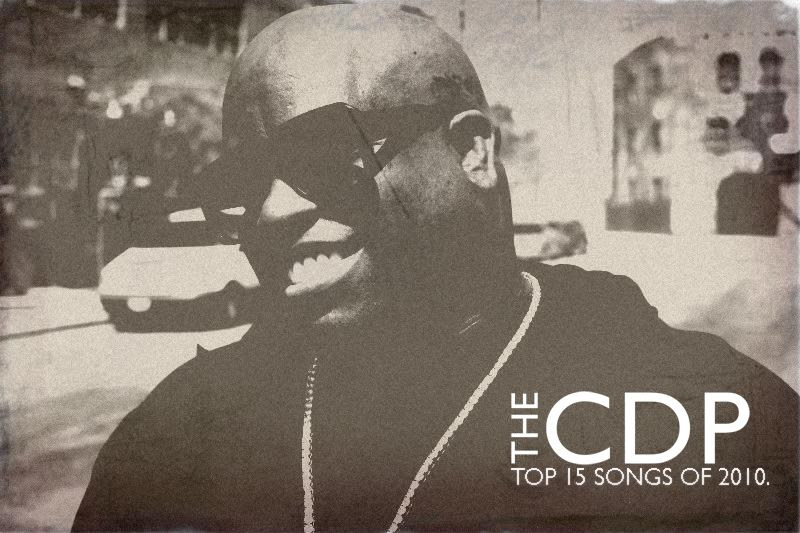 Welcome to Day 1 of a week-long celebration of all things music for 2010. Today, we focus on singles, as I countdown (and meticulously link you to) my 15 favorite tracks of the year. These are my personal favorite songs of 2010; I'm not a tastemaker and I'm not Pitchfork, so enjoy it for what it is.

The Thermals are consistently the hardest-working band in Rock, and while Personal Life didn't infiltrate ears the way that The Body, The Blood, The Machine did, we still got a solid track in 'I Don't Believe You.' I'm not a Ke$ha fan, but 'Your Love Is My Drug' was one of the only songs on the radio that I waited to hear, which is saying something. The Hold Steady continues to make fans and reinforce the grizzled ones, and 'Soft In The Center' is as therapeutic and vintage Craig Finn as you'd expect. 'Heartbeat Song' is possibly the catchiest Futureheads song yet, which is a near-impossible feat at this point in their career. Finally, Sleigh Bells gave us the loudest, most bombastic beat of the year with 'Crown On The Ground.' Listen and blow your speakers out.

'Can't Explain' hit me at the right time this year; the Shout Out Louds always seem to show up when I need them the most. Titus Andronicus arrived on my radar out of nowhere, pretty much throwing all caution to the wind with their ambitious and fearless second album. 'Ambling Alp' is probably the track I've listened to the most this year, to the point where my wife essentially hates it (totally my fault, there). The Tallest Man On Earth absolutely blew me away with 'The Wild Hunt,' making me an instant fan with his beautiful songwriting and lyrics. Finally, Arcade Fire didn't wow me this year with The Suburbs, but lead-off single 'Ready To Start' is as good of an epic as anything off of Funeral or Neon Bible.

Any of these Top 5 could have been #1; they're all amazing to me in their own way. 'Bushwick Blues' is so purely honest and driven, that when I first heard the song I stopped everything I was doing, bought it on iTunes and listened to it 10 more times. 'Bloodbuzz, Ohio' encompasses everything I love about The National; driving home to see the relatives for Thanksgiving instantly put the song into vividly depressing perspective (which caused me to get all misty-eyed). 'F*** You' will get plenty of well-deserved accolades this year, so I dropped it to #3 in favor of more personal favorites of mine. I will say, however, that Cee-Lo is a genius, probably crafting the most universally-adored hit since 'Hey Ya!'

Josh Ritter threw everything but the kitchen sink at 'Change Of Time,' which ended up working like a charm. The tale of an insecure, unsure man having a vivid nightmare, only to wake up next to his beloved and once again feel peace and confidence, is woven like only Ritter (a master lyricist) can. The line 'I had a dream last night/And when I opened my eyes/Your shoulder blades, your spine/Were shorelines in the moonlight' is as beautiful as anything I've heard all year. I could easily write five pages on this track alone, but I'll just let you listen to it and discover what it means to you.

Finally, I gave #1 to my sentimental favorite, Sage Francis' 'The Best Of Times.' Every now and again, you stumble across a song so good, so personalized and so indicative of your personality, that you wish you would have written it yourself. I'd say this feeling has encapsulated me maybe five times in my life, and it did for sure when I first heard 'The Best Of Times.' I've always enjoyed Sage, his lyrics, flow, delivery and non-stop cynical attitude towards...pretty much anything and everything. I understand this, and I understand 'The Best Of Times.' So will you.

Before we go, a quick look at previous winners of the CDP's Song Of The Year:

Comments:
Nice work! I agree with most of this, especially your sentiments wrt Arcade Fire and The Suburbs. Kind of vomiting at the inclusion of Ke$ha at the exclusion of like anything from Go by Jónsi because the whole album is amazing (esp. Kolniður and Go Do or just go buy the album because if I keep going I'll just post the whole thing).

I herd you like Sage Francis? That song is awesome and makes me cry. Sage Francis is awesome and brilliant. There's another hip hop group that I love that's on the same label as SF in America (they're British) called dan le sac Vs. Scroobius Pip. They're fantastic and do hyper-socially-aware hip hop. The song "Get Better" is a great song from their 2010 album, Logic of Chance, but to be honest their 2008 album Angles was much better ("Thou Shalt Always Kill" is good and "Letter From God To Man" gives me chills; BUT GET THE WHOLE ALBUM!!!!!!!).

Some of my other favorites this year are Kid Cudi - "Scott Mescudi vs. The World" (featuring Cee-lo Green!!), Kanye West - "Power", Stars - "Dead Hearts", Gorillaz - "Empire Ants" and Gold Motel - "Perfect In My Mind" (please please please download their album!!!).

On a related note, Murray Gold composed what is possibly the best television score in a long time for this season of Doctor Who. It was epic. Exhibit A: the Eleventh Doctor's theme. Doesn't that make you want to save the world?

Wow, look at all that HTML. You've given me something to do today; I shall listen to everything you have included in this cornucopia of 2010 tunery. I've overlooked a lot of what you've spotlighted, so I'm looking forward to it.

I've been listening to Sage for quite a while now. And while he tends to waver in effort from track to track, when I first heard 'The Best Of Times,' I knew it was the best thing he had done since 'Makeshift Patriot.'

Oh, man! I forgot 'Bedrock' by Young Money. That was my favorite hook of the year!

The new Josh Ritter album was my prize pick-up on Record Store Day. I don't disagree on the majesty of "Change of Time" but the song that I can't get enough of is "Lantern."

I also have been vacillating on my favorite song off Heaven Is Whenever. I'm going to say "The Weekenders" for now.