The Walking Dead Friday - "Tell It To The Frogs." 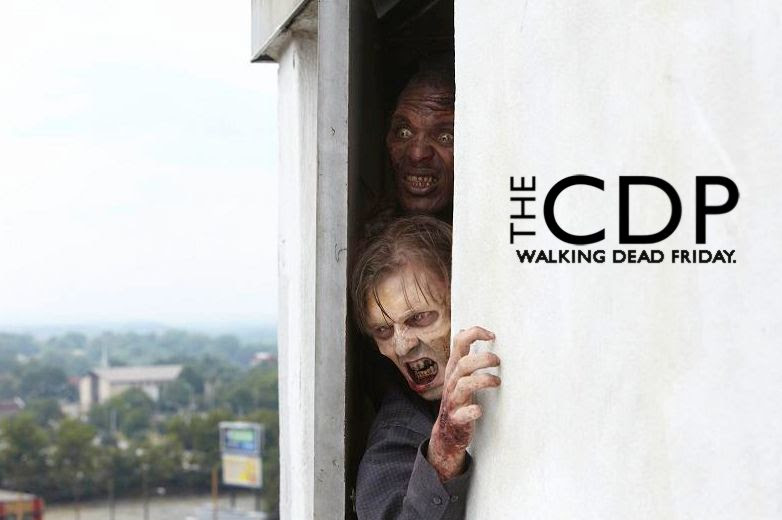 Another Walking Dead Friday is upon us. We have much to discuss, but quickly. I've had a rather busy week, busy enough to cause today's review to be scrapped together in the eleventh hour.

On Monday night, I was in Chicago, dancing my ass off to the Reel Big Fish/Aquabats show at the House of Blues. I had a great time, I didn't lose my car (despite my best efforts) and the company I kept was top-notch. Really enjoyed myself.

On Tuesday, I had to take the Missus to the doctor because her head exploded. She's better now, but that shot a better portion of the afternoon to pieces. Migraines suck.

On Wednesday, I met up with Madison gadabout (and Dane101 mastermind) Jesse Russell to discuss global domination and the Dead Milkmen. He's good people, Stuart. A fine American.

On Thursday, I had to fill my house with groceries and spend an hour on the phone with my mom, as she talked me out of my current 2011 goal of getting into shape and participating in a MMA bout. She can't tell me what I can't do. I'm a man. I drive a Mercury Sable with a big dent on the passenger's side.

So that leaves me here..Thursday night at about 11:45pm. When I publish this bad boy, it's going to be so fresh it'll be flopping around on the screen. So let's get into it already. 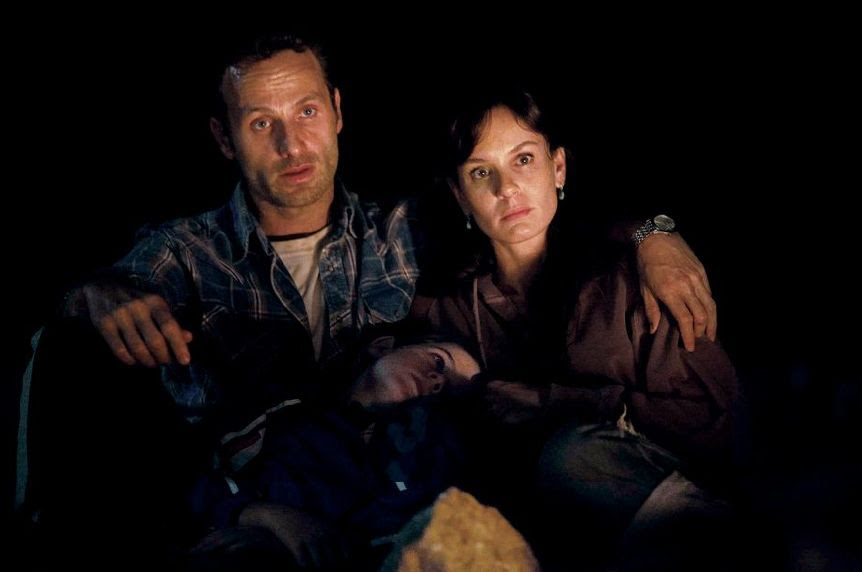 (Dale launches into Hour 3 of his story about meeting Adam West.)

Delirious Merle
Is surrounded by Roamers.
Hacksaw off that hand! 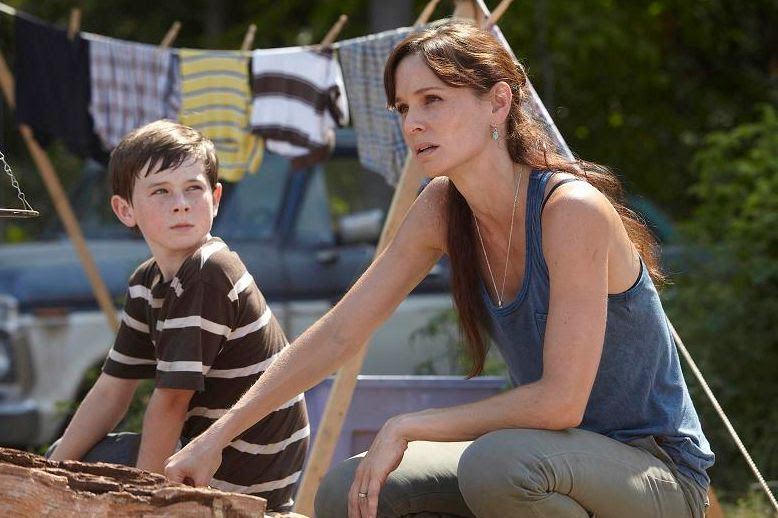 (This woman is getting more sex than me, and she's in a zombie apocalypse.)

Daryl; Merle’s brother
Is more than a little pissed.
We have to go back! 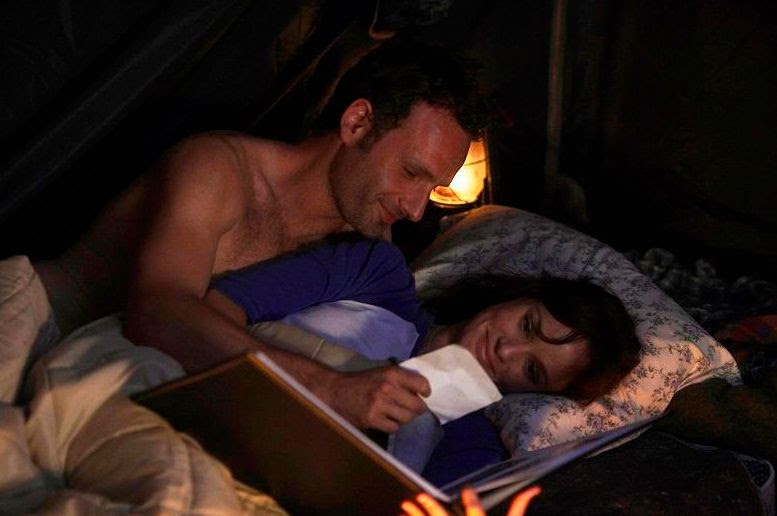 ("Check it out, one of the Roamers sent us a Thanksgiving card.") ("Anyway, like I was saying before I accidentally shot my foot off...I totally hit that.")

Shane lied to Lori
By telling her Rick had died.
She didn’t take it well.

Roamers are abound.
Food in the city is scarce,
Just like Madison. 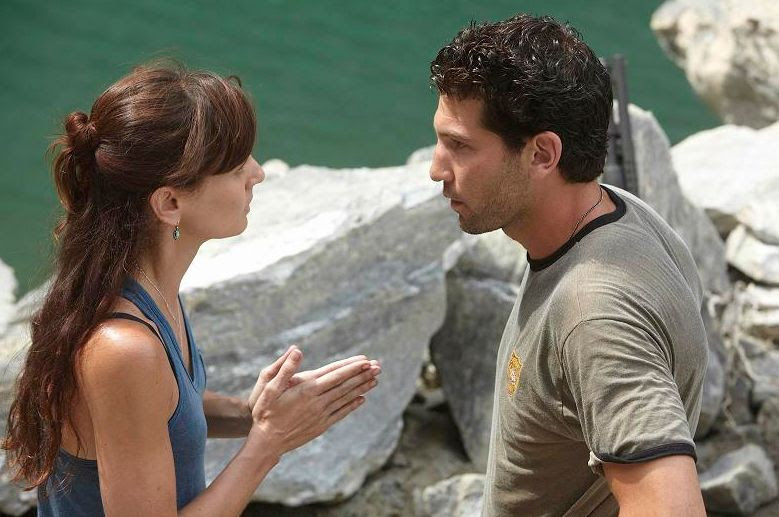 ("Allow me to illustrate our intimate future by tightly clasping my hands together. Got it?")

Rick is going back
For Merle and all of his guns.
Well…mostly the guns. 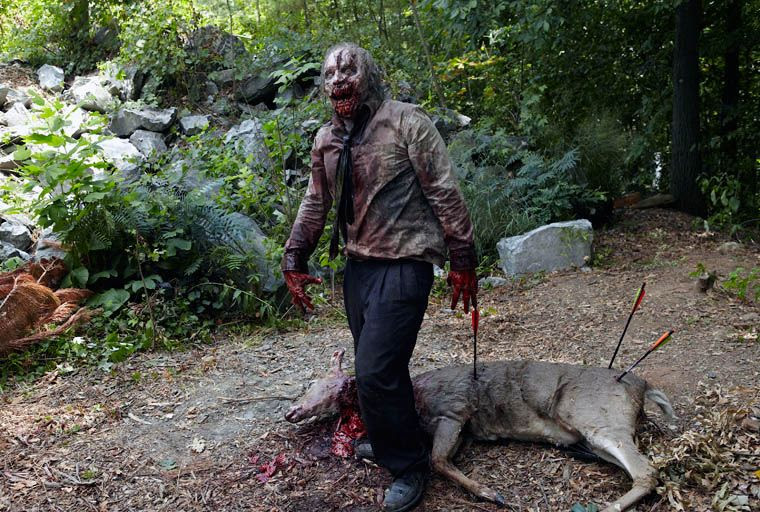 (This was Scott Walker's campaign poster. It snagged a lot of 'NASCAR Dad' votes up north.)

Douche Ed slaps Carol
So Shane pummels him to bits.
He’s in a bad mood. 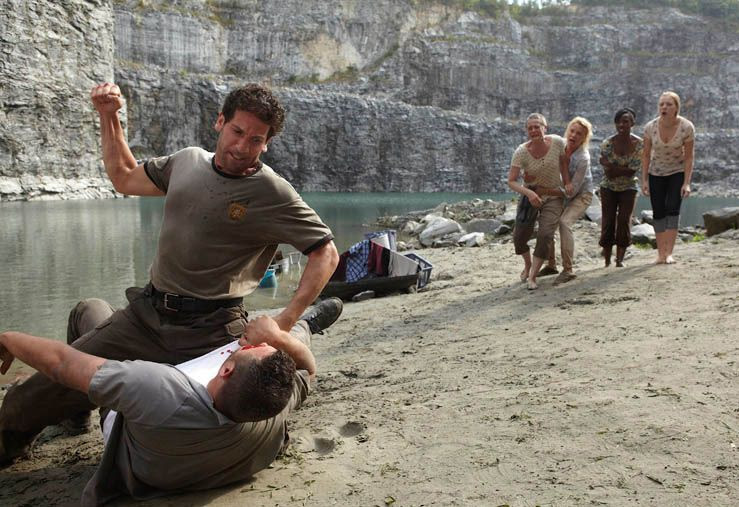 ("ADMIT IT! While the Blue Album was more commercially successful and musically accessible on a Pop level, the themes, songwriting and musicianship of Pinkerton make it the better album in the long run, when you take critical acclaim, personal resonance and genre influence into account. ADMIT IT!!!")

Back in Atlanta
The team returns to the roof
To lend Merle…a hand. 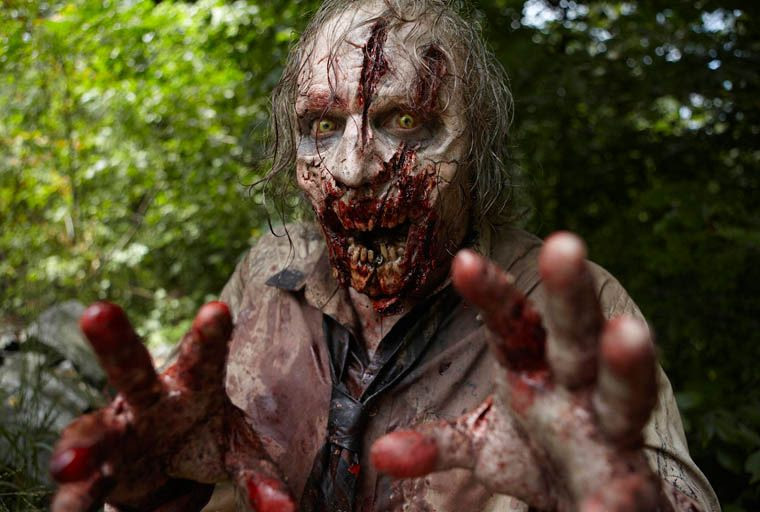 ('Sarah Palin's Alaska' has kind of gotten off to a weird start.)

That's it, I'm out of here. Thank you for reading; sound off in the comments section and enjoy your day. Next week is big here, as Aerating The Mashed Potatoes gets released globally, making me an instant millionaire and keeper of the hearts of thousands of confused young men and women. Come on back when you get the chance. Bye.

Where A Kid Can Be A Kid. 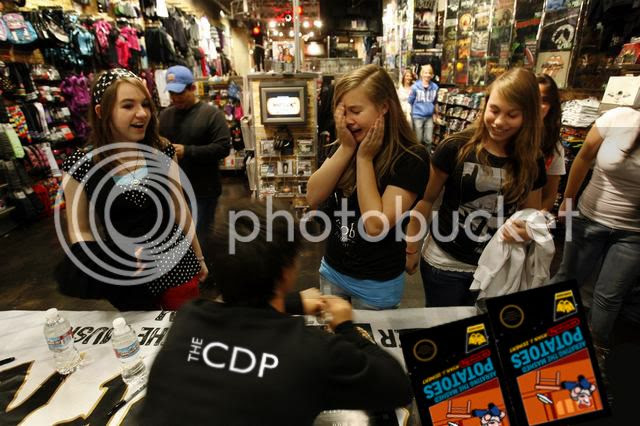 1. I've been whoring out my new book pretty heavily for the last few weeks, and I want to let you know that I'm entirely cognizant of that fact. Honestly, I don't really like having to do it, but I think it's a good book and I don't have publicists to promote for me, so we're all sort of stuck with it for the time being. I appreciate your patience, and I can assure you that I'll get back to the funny stuff as soon as I can here on the CDP.

In the meantime, buy my book. It's the best thing I've ever done.

Now, in the last few years, I've only experienced celebrity status on the absolute tiniest of levels (second only to the level of celebrity you feel when it's your turn to bowl). That being said, I find myself having a much harder time dealing with positive attention than negative. Negative attention and criticism are constants in my life; something I'm entirely used to and know how to manage. Positive attention, however, is foreign and bizarre. When someone approaches me and exclaims how much they dig my work, or how a particular essay made them stop cutting themselves or something, I all but clam up, totally unsure of what I should say next.

Generally, I just say thank you and maintain eye contact. Other times, I make a joke at my expense and stand quietly until a phone rings. Just know that I care more than I can convey, and it means a lot to me. I gave up music in exchange for writing because I suck at those sorts of public exchanges, which brings me to my next point. 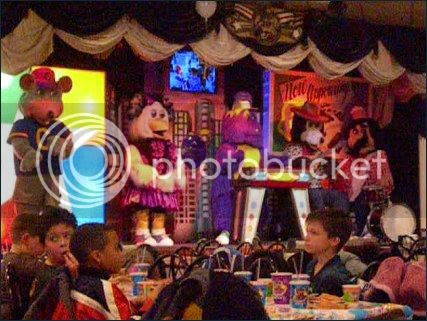 2. People had been asking me if I planned on doing a live reading/signing in the Madison area. While I thought it was a cool idea, I didn't want to go the conventional route of the coffee shop or bookstore, so I called up the nearest Chuck-E-Cheese and asked what their rates were for renting out their Party/Animatronic Band Room (I'm not kidding). And while just $6 a person paid for two slices of pizza each, unlimited trips to the soda fountain and a free 'gift bag,' I didn't think I could gather enough interest to make such a party come to fruition, even if they did serve beer (which they totally do). Just know that I tried.

I only want to put on things like this if I'm sure that everyone around me is going to have a good time. I don't do anything group-related for my own personal benefit; even my wedding was essentially a weekend-long party where everyone shared the stage equally. If I were to do a signing, under no circumstances was I going to sit behind a table while my friends waited in line, friends who were smarter and funnier than me in the first place. It was going to be a fun gathering that focused on the very ridiculousness of customary procedure, ridiculousness that I try to write about every day.

If you're still interested in going to Chuck-E-Cheese with me though, let me know. I'm just looking for an excuse at this point. If I go alone, I'll probably get arrested. 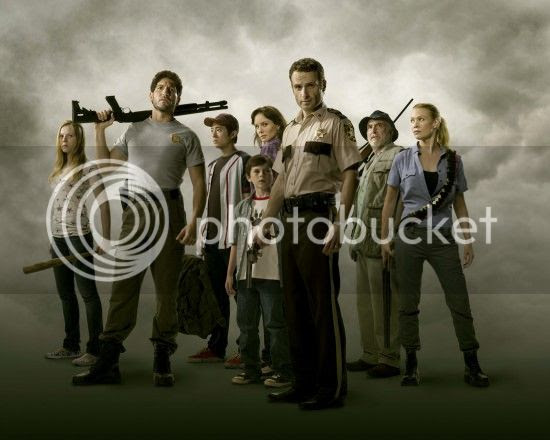 3. Speaking of the CDP, expect more Walking Dead Fridays, culminating into a December that features the Top Albums Of 2010, the CDP Year In Review, and the 2010 State Of The CDP Speech to round out the year in style. In addition, there will be more book stuff sprinkled about, as it becomes available nationwide in just a few days.

I've been blogging for almost seven years now, and this time of year always reminds me of that. It's gotten to the point where I don't really remember what my life was like before I felt it necessary to document everything that's ever happened to me ever forever. I don't know what 2011 holds for the CDP, but I definitely can't wait to write new essays, and I hope it reflects that. 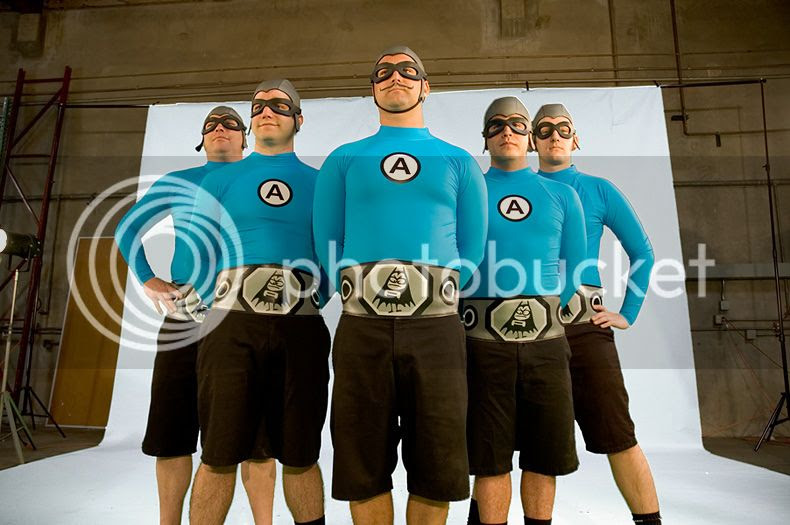 4. Tonight, I will be at the House of Blues in Chicago. If you're in the area, let me know. I'll buy you a beer and dance with you and kiss your neck.

Thanks much for reading. Sound off in the comments section and enjoy your day.