Time To Meet Your (Sandwich) Maker. 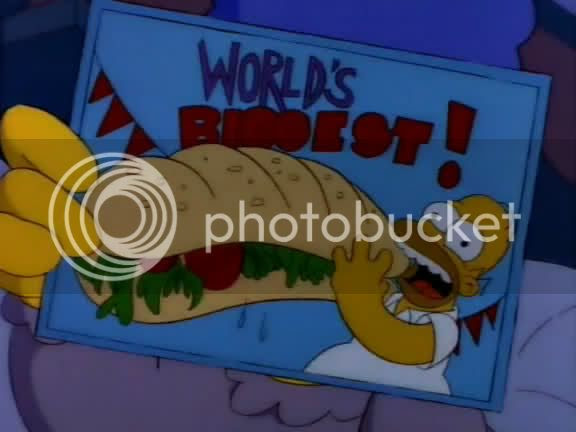 (I found this little guy tucked away on a flash drive. While it's technically a new CDP essay, consider it as more of a B-side.)

A few weeks back, my debit card snapped in half while I was swiping it at a gas station. I was annoyed but not wistful-- It had a good run. I use my debit card for literally every purchase I make. I seldom carry cash, open tabs at bars and absolutely never carry credit cards with me. My wallet consists of only my debit card, driver’s license and various coffee shop punch cards, and that’s the way I’ve always liked it.

I’m aware that while it’s responsible to keep credit cards out of your wallet to limit impulsive spending (or because they’re maxed out beyond all comprehension), it’s also important to have some reserve funds on hand in case your debit card snaps in half at a Kwik Trip. I guess I like to live on the edge. F the police and soforth.

That evening, I contacted my credit union and requested a new debit card. They told me that a replacement would arrive at my door in a few days, and since it was an identical replacement (same number and expiration date), a re-activation wouldn’t be necessary. As soon as it showed up, I could just place it in my wallet and start feverishly buying cat food and 90’s anime as per usual.

I had the operator verify this statement three times. It didn’t seem right to me. I should have trusted my gut.

I was home when my replacement card showed up in the mail. Following orders, I humanely euthanized the busted card (paper shredders have such a cathartic sound) and simply placed the new one in my pocket. After all, the operator said it was good to go, and surely the last thing a Call Center employee would do is say whatever I wanted to hear so they could end the call as quickly as possible.

I thought I’d celebrate a job well done by getting a sub sandwich for lunch. The Subway was about five minutes from CDP Headquarters, and I have the culinary abilities of a newborn giraffe when I’m alone in the house. I walked in, got into the (surprisingly lengthy) line and placed my order.

So many people feel that those in the retail and food service industries owe them something. I feel the exact opposite. Considering the work and care most people put into your food (or at least should be putting into your food), I’m always baffled at why sub sandwiches aren’t $20 apiece. I watch, marvel, thank profusely and tip (when I have cash) every time. It’s a job I fortunately never had to do, and I appreciate anyone who could just as soon gob into the mayonnaise every time you turned away, but doesn’t for one reason or another.

I handed over my shiny new debit card. It was about to be de-virginized.

“Sir…It’s saying that your card is declined.”

Not only was I upset because I didn’t trust my gut when I assumed this would totally happen, but I didn’t have any other money with me, the long line behind me was growing impatient and my sandwich had already been made. I’ve never been in this sort of nightmare transaction before. I had no idea what I was supposed to do. Just walk out? Didn’t I still have to pay for the manual labor that went into the sandwich? This was about to get extremely embarrassing.

Confused beyond words (as were the onlookers behind me), I turned around and goose-stepped out of Subway without my sandwich, which was slowly turning to room temperature behind the counter. As I got back to my car, my initial thought wasn’t that I should just run home and grab the money with which to buy this sandwich (I wasn’t even planning on eating it anymore; I just wanted to make things right). No, my initial thought was “I’m leaving and never coming back. No way can I ever face these people again after what just transpired.”

I eventually wised up and decided to reactivate my debit card in the parking lot. When I did, I questioned the operator as to the misleading information I was offered earlier:

“Yeah, I was told that I didn’t need to reactivate this.”

“(laughing) Who told you that?”

About 15 minutes after the fiasco, I bit my lip, lowered my head and walked back in. I needed to pay for this sandwich. Standing in line was weird to say the least:

When I got to the register, the same kid was there (for better or for worse). I explained to him what had happened, and that I didn’t even want the (now gross) sandwich, I just wanted to give them the money they deserved and immediately hook up with the Witness Protection Program. Or at the very least, start eating at the Jimmy John’s further down the street. My relationship with this franchise was officially over.

“Okay, sounds good. I just need to grab a manager. He needs to do a weird refund processing thing on the register.”

The line behind me was getting longer and more impatient. I started to sweat.

When the manager showed up (who was 16 years old at best), he had to futz with a computer underneath the register to reverse the mistake I had made earlier. He was ducked under the register, and at one point near the end, the cash drawer dinged open without him noticing. When he went to stand back up, he bashed the top of his head underneath the register, sending the drawer and loose change flying everywhere. A nickel landed in the teriyaki sauce. It was probably the loudest thing that has ever happened inside of that particular establishment. A woman gasped.

I was goddamn mortified. This was all my fault. Not only did I ruin my day, I literally ruined the day of every single person in that Subway. The cashier, the manager, the sandwich artist, the customers, everybody. Again, I left with nothing.