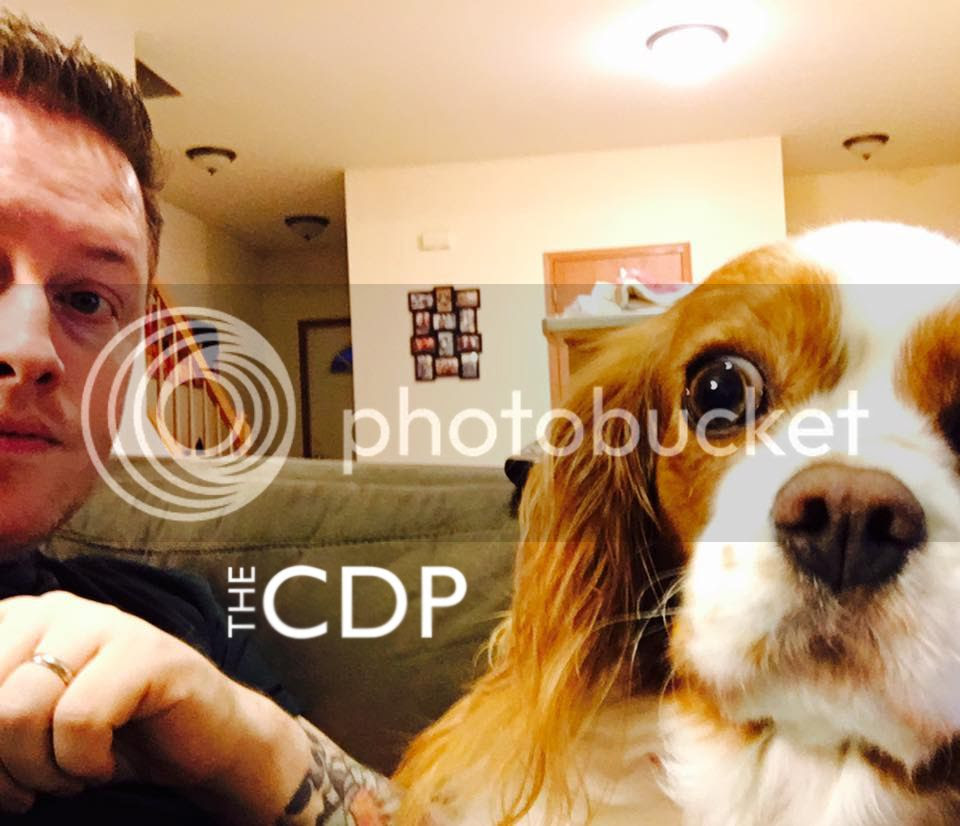 When I was very young, my family got a dog. His name was Jasper. Here is literally everything I remember about Jasper:

Nobody trained him. Nobody housebroke him. I never saw him eat. I never saw him sleep. I never saw him poop. He barked constantly. He ran unsupervised and unleashed around our property. He jumped on everyone. I don't remember how we obtained him, and when he vanished without a trace one day, I never knew where he went.

Needless to say, it was sort of a bad experience.

But hey, if you haven't noticed, I'm having myself a rebuilding year, and one of the ways you evolve is to put the baggage of the past behind you and claim new experiences for your own. And that's exactly what I did when I adopted Dottie Dumpling Dog a few months ago. 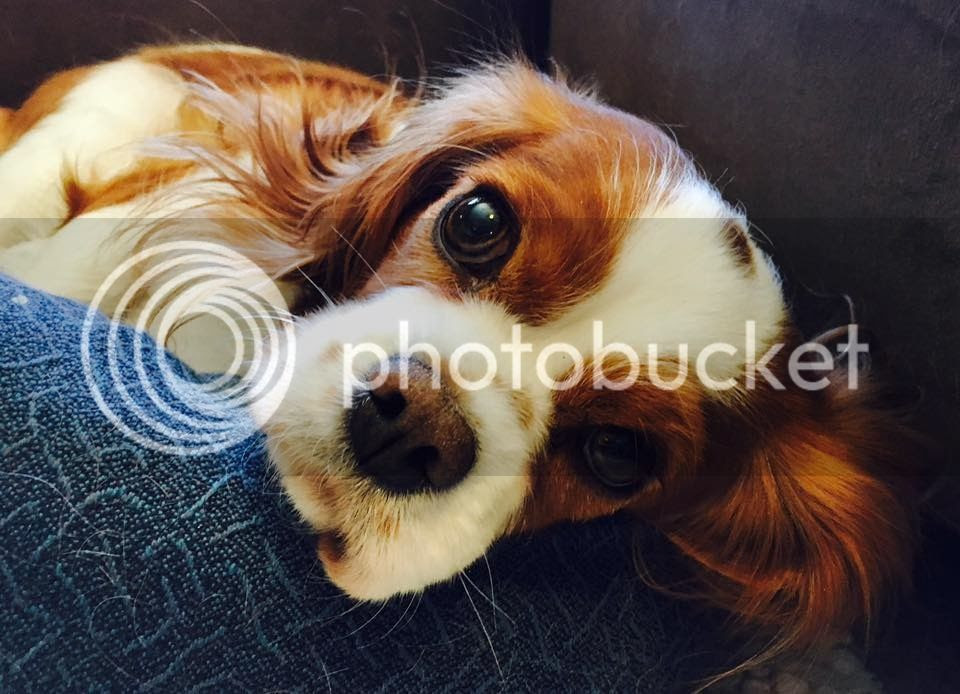 (Dottie in her typical habitat.)

I've always been a cat owner, and it has suited me just fine. I speak their language, I can leave them unsupervised and they match my personality in a way that dog's don't. I also don't have to stand outside with a cat in sub-zero temperatures for hours at a time while they search for an adequate place to whiz. Even when the Missus pushed to have three cats at once (which we did for a few years), I eventually relented, because it wasn't a big enough blow to my psyche to dispute. 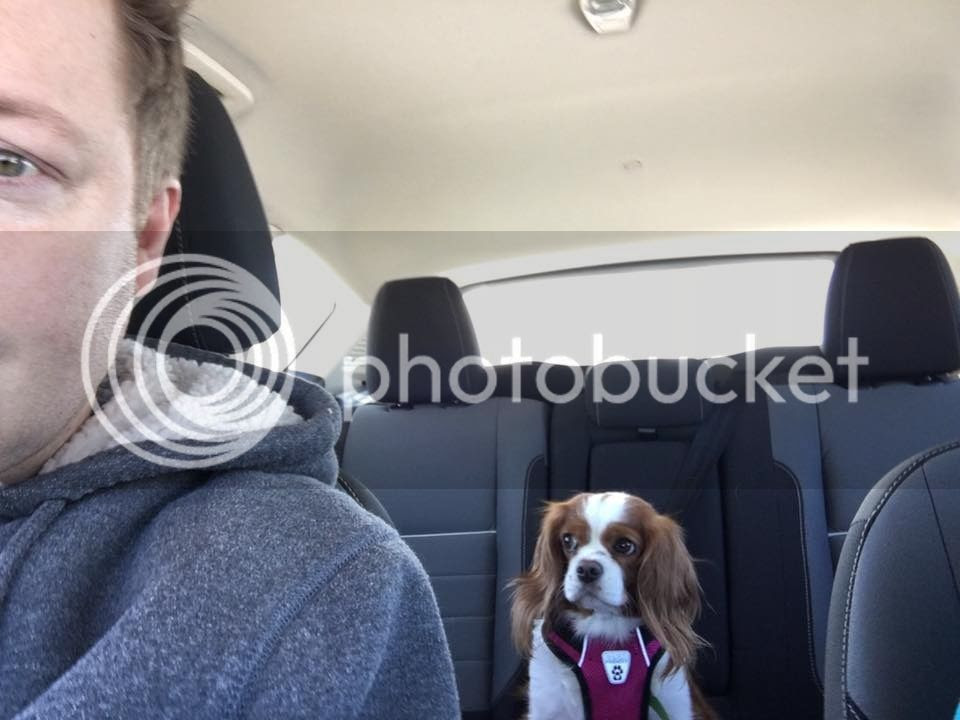 (Dottie on her way home from Camp. Safely harnessed, of course.)

For several weeks, the Missus subtly schooled me on the virtues of the Cavalier King Charles Spaniel. Small. Loyal. Quiet and calm. Sleeps a lot. Develops a strong bond with their owner. Intelligent and easily trainable. Sure, they all have major heart problems and die early, but hey, that's what a thousand years of inbreeding will do to any species. 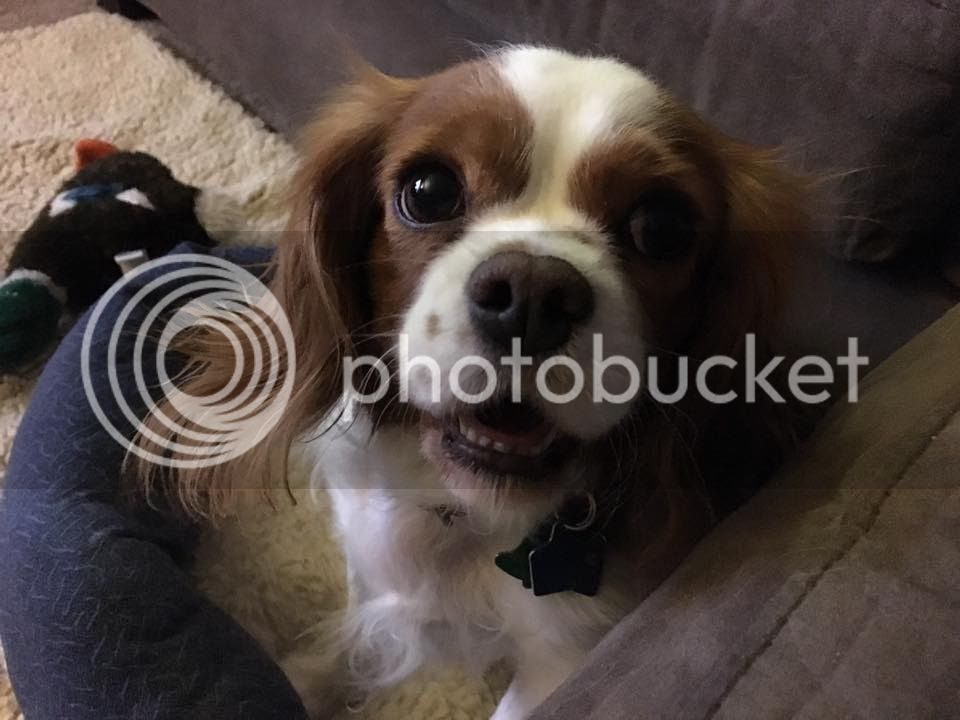 I must admit, I was sort of placating her when I said that sure, I'm willing to look into the option of adopting a Cavalier, as long as it's from a shelter. I knew that these animals were primarily purchased from breeders and mills, and the odds of one appearing in a shelter was slim-to-none. In fact, in all my years of visiting dogs at shelters, I never saw a Cavalier available for adoption. It was a win/win for me: I was supportive while confident that I didn't have to actually see my promise through. I'm kind of an asshole sometimes. 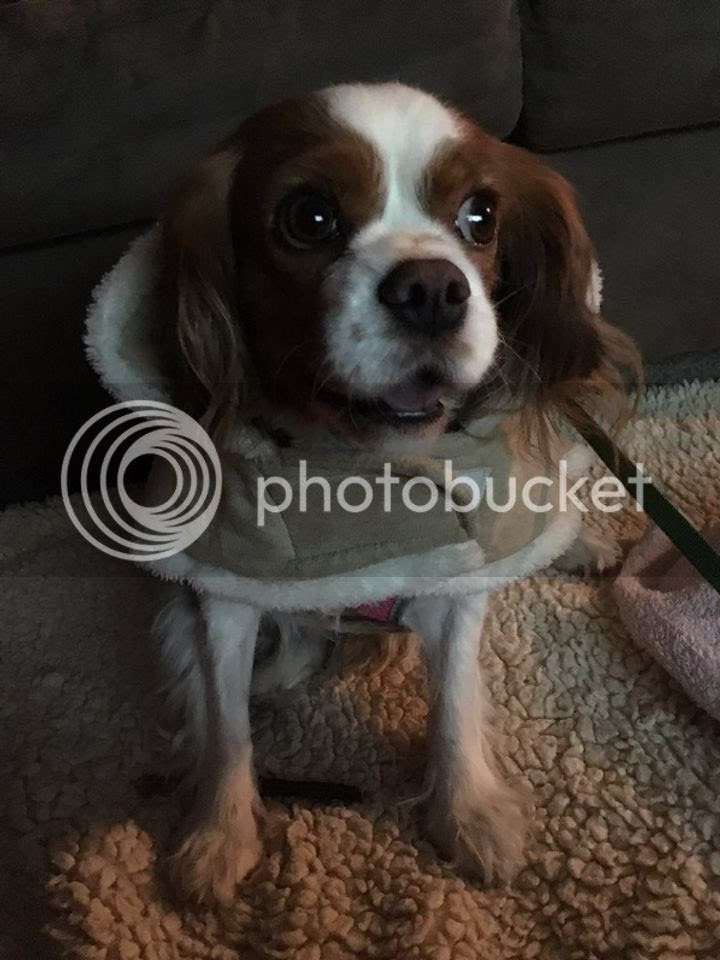 (Dottie in her Winter parka.)

But then it happened. During an Adoption Fair at a local store, we saw Dottie (named Patches at the time). She was receiving a lot of attention from passers-by, but stayed quiet and shy in her cage. As it turned out, the story of how she ended up in a shelter was quite the bummer.

She's a purebred that spent all of her adult life in a Puppy Mill as a breeding dog. She mothered litter after litter under she was overbred and suffered an umbilical hernia. Now, no longer useful to the shitbags who ran this mill, they decided to throw her onto the street instead of paying the money to patch her up. I'm quite certain she never had a positive experience with a human being in her entire existence. 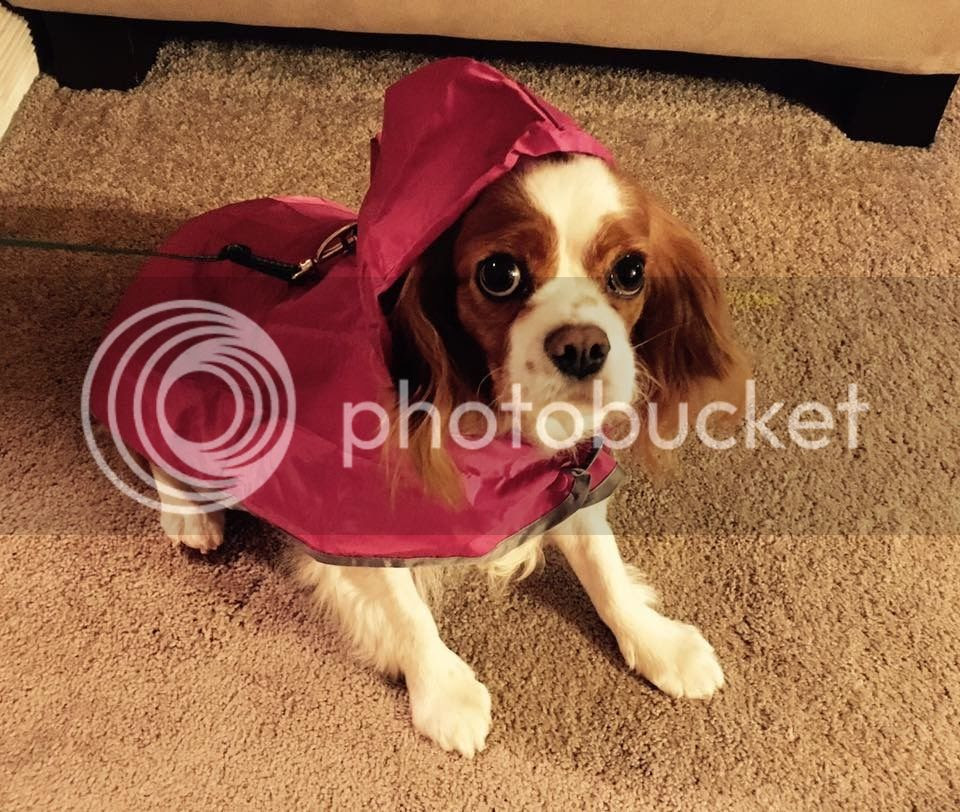 (Dottie in her raincoat.)

So she ended up at the shelter, where they successfully completed the surgery and scooped out her uterus so she didn't have to work as a breeding dog anymore (I'm pretty sure that's how that works). For all these reasons plus the ones Celia sold me on, we ended up running into her on that particular day and adopting her on the spot.

I was admittedly terrified. For most people, this was just a dog. Dogs are easy. Most people have had dogs their entire life. I had not. But this was about so much more than feeding and training to me. It was about erasing the lingering Jasper issues of the past and truly offering Dottie the safe and loving environment she deserved for the rest of her days. It was also about pushing my comfort zone as part of my self-improvement when it came to my Anxiety. 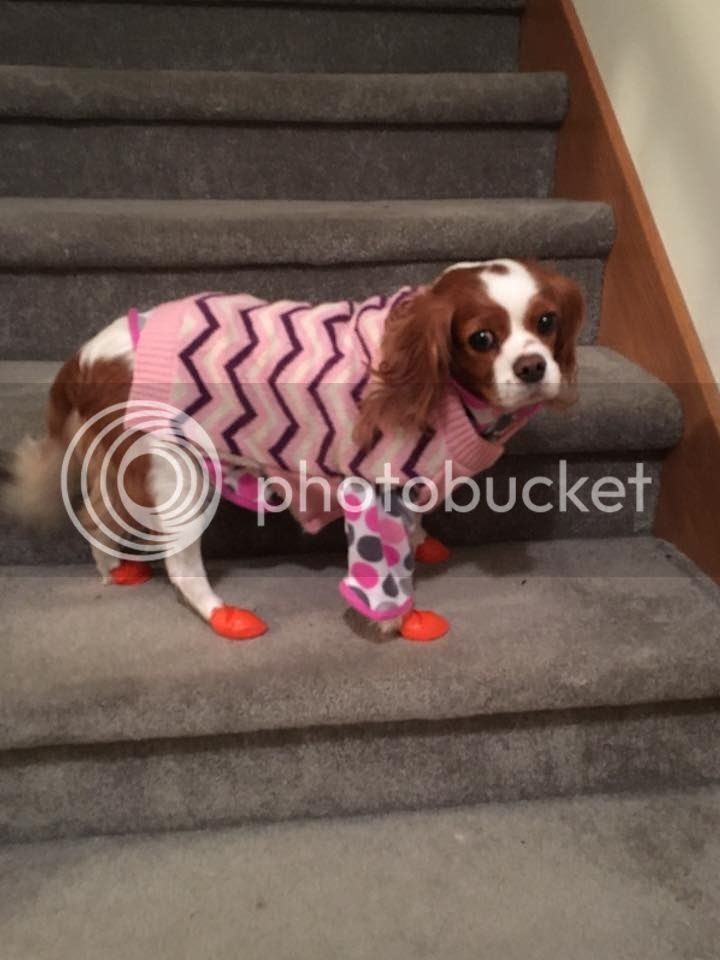 (When it's brutally cold outside, there isn't much time for fashion.)

I'm 34, but in a lot of ways, adopting Dottie felt like the biggest adult responsibility of my life so far. Owning a house, keeping a job, remaining a good husband, these things came far more natural to me than taking care of a needy animal. No more leaving the house on a whim and returning whenever I pleased. Lots of walks. Lots of poop. Lots of hair on the carpet. Dottie didn't realize it, but merely by her existing in my house, she was going to help me manage my Anxiety by forcing me to just let things go every once in a while. She was going to make me happier by first making me very, very uncomfortable.

If this poor dog knew the kind of pressure I was placing on her in regards to my sanity and well-being, she'd fling herself through a plate glass window. 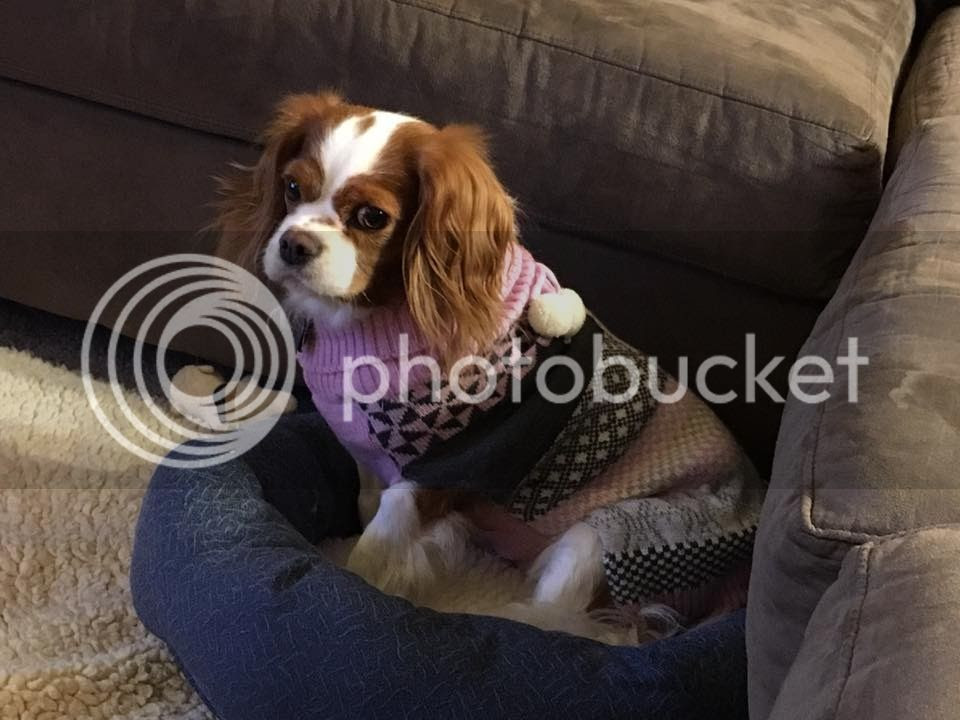 (I had no idea how much fun it was to make animals wear clothes.)

What I thought I was going to get in Dottie...was a dog. Jumpy. Barky. Messing stuff up. Being a doofus every once in a while. An animal that didn't care about my brain and forced me to be more happy-go-lucky and dog-like. What I actually got was more of a representation of what Dottie had to go through before I showed up. Basically myself in dog form. Anxious. Afraid of everything. Not trusting of male authority. Skittish when she feels out of place. A wonderful soul with plenty of love to give, but quirky and requiring lots of patience and slow movement. 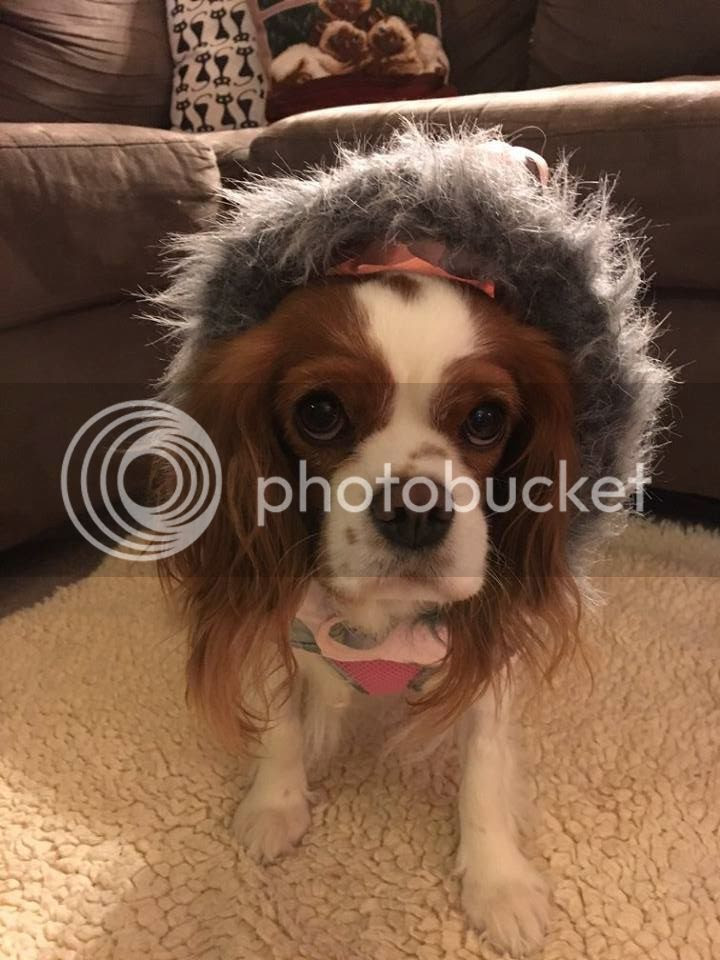 It was the opposite of what I had planned. I thought the former would be just what I needed, but it's been the latter that I got, and has forced me to ask the real questions about myself.

It's been slow-going, but she's starting to warm up to me. I understand; I can't even fathom what she went through at the mill. She loves the Missus unequivocally, but because I'm a big oaf with a loud voice, she's not a huge fan of my affection. She doesn't growl or bark, she just seems really scared, which makes me sad. When I start to feel impatient or frustrated, I just try to empathize and give her all the time and space she needs. 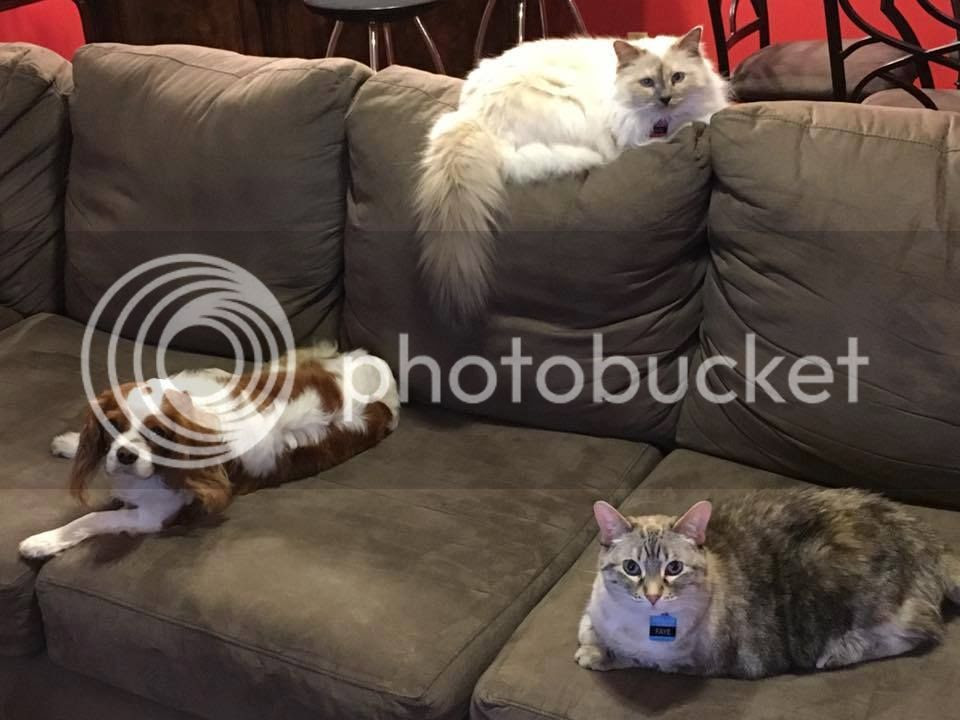 I gotta be patient. She's a work in progress. Just like me.

Sound off in the comments section and enjoy your week. If you'd like to visit Dottie's personal Facebook page, give it a go! 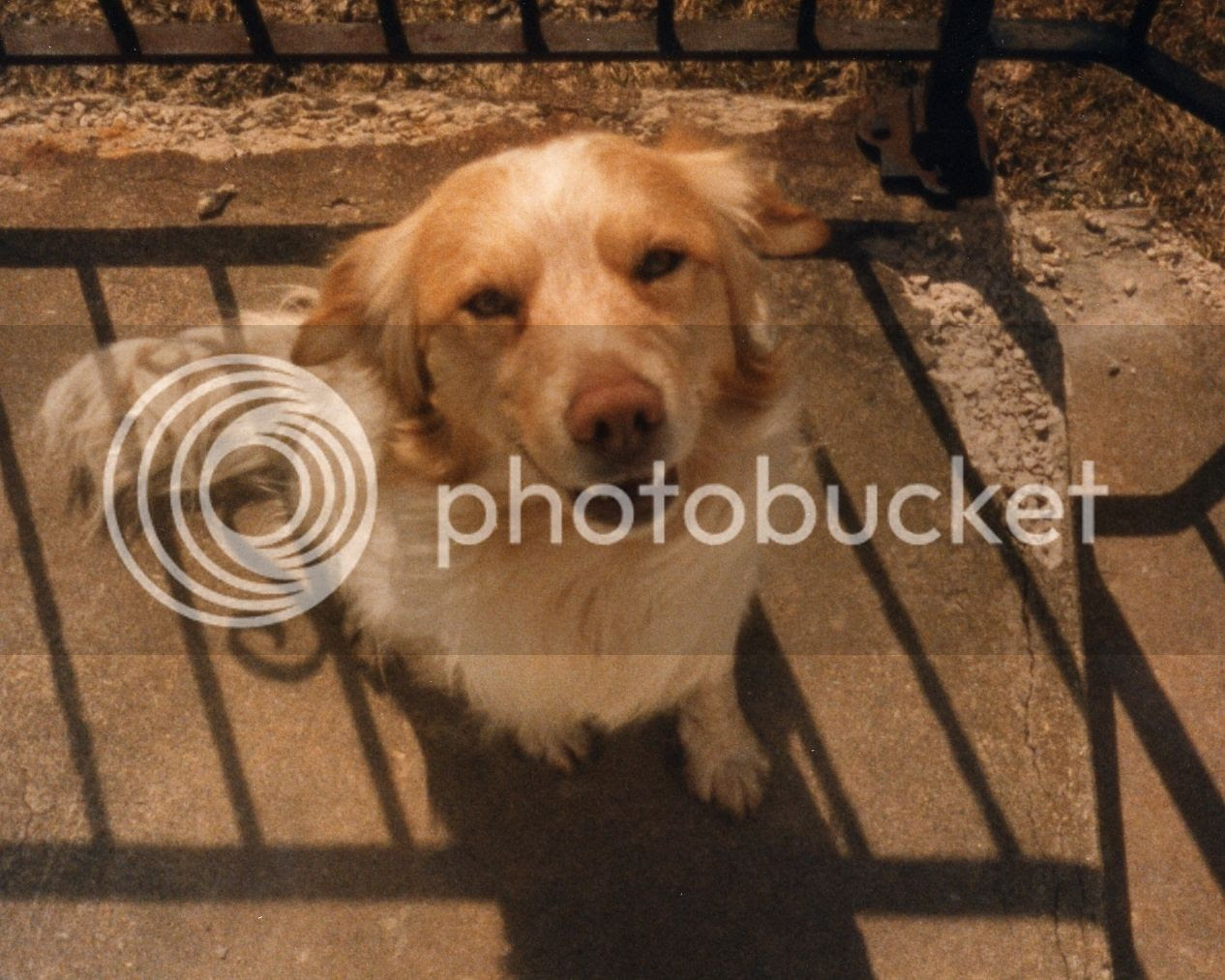